A Kind of Sacramental Act


As we have seen, when the artists of the sixteenth century wanted to paint "the merchant" they had ample reason for presenting him, as did Quentin Metsys in his pleasing little painting in the Louvre, busy weighing gold, with an expression at once serious and absorbed, appropriate for the financier. His wife at his side, prettily capped in black, distractedly leafs through a marvelously illuminated Book of Hours, but not without casting sidelong glances at the gold coins which her husband is meticulously weighing and reweighing. The weighing of gold is a kind of sacramental act of the merchant of the Renaissance. It was not Quentin Metsys alone, or only his emulator and continuator, Marinus, in the careful paintings identified by Monsieur de Mely, who depicted that familiar scene.25 We see it in the works of Corneille de Lyon (also the attribution of Monsieur de Mely). In Jost Aman's large engraved allegory of commerce one sees in the foreground, next to the accountants' desks and the cashiers' counter, a big money-changing table on which two clerks are carefully counting sacks filled with coins, some of which fill the pans of the balance. It is those gold-weighing scales which are the true symbol of commercial activity of the sixteenth century. 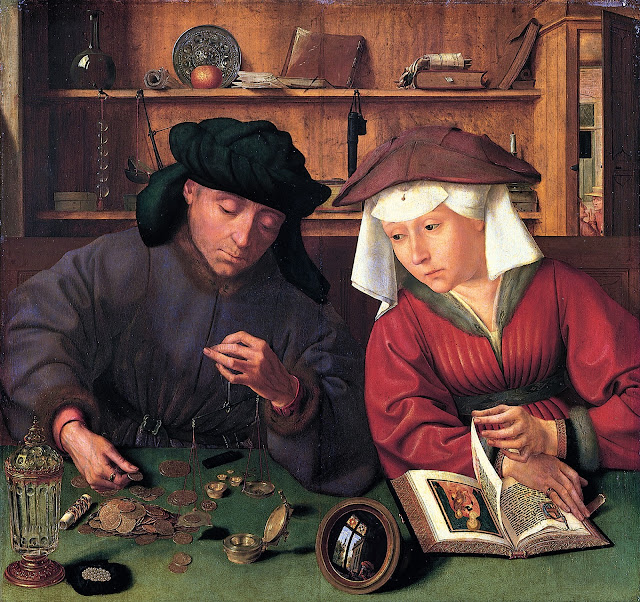