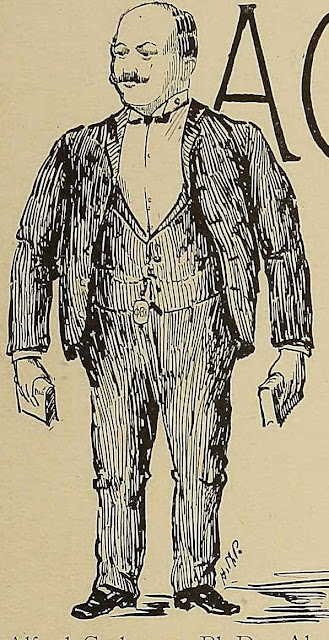 The caricature appeared in a University of Pennsylvania college yearbook, accompanied by a satirical article, "A Glimpse at Gudeman," which I found on ancestry.com, downloaded, and transcribed (the "[sic]" is my own insertion):


'Tis a balmy morn in early spring. The scent of sprouting grass and Freshmen is in the air. College hall is alive with the babble of many youthful members of society seeking instruction at the fountainheads of knowledge, but as yet the "Crystal Palace of the Muses" (second floor west) is silent and deserted, and the gentle zephyrs, laden with the perfumed odors of medical hall play at their own sweet will through the open windows. Before long, however, the ponderous hands of the college clock (for details as to which wonderful piece of machinery apply of Shorty McGrath) indicate that the fateful hour of 11 is approaching, and at precisely five minutes before the hour the peace and quiet of the "palace" are disturbed by a pitter-patter of diminutive feet outside in the vulgar hallway. The knob turns, the glass door opens, and there enters the daintiest little Dutch philologist in all the world, Alfred Gudeman, Ph.D. Ah, the very gently-curving man, like Falstaff, with "something of a round belly;" his face is full, and, I regret to say, voluptuous (due to his continual reading of "Gudeman's Expurgated Passages of the Classics"); his head is very round and shiny, save where a few sparse black hairs are plastered stiffly upon his pate with odoriferous bear's grease. He wears a celluloid collar, spotlessly clean, and a blue cross cravat with white stripes, which J.H. Langstroth one day discovered was likewise celluloid, thereby explaining the hitherto unsolved mystery of "How I wear the same cravat continuously for two consecutive years?"

It goes without saying that his spotless shirt is of the same material. As already suggested, "he hath an excellent stomach," which is well protected against the stilettos of its enemies by what appears at first sight to be a large plate of brass a foot and a half long by half a foot broad, but which is really nothing but a specially-made and disgracefully-large badge of Phi Beta Kappa, which he purchased at Columbia for the price of two years' leg-pulling, much to the discredit of this otherwise honorable institution.

"Gutsy" (for so he is universally known among his loving pupils) walks at once with dainty tread to his desk, and, pulling out of the drawer a copy of Tacitus, opens at the lesson and sits like the spider, ready to pounce upon the first unwary fly that enters his parlour. Presently the bell rings and the fly enters, in the shape of Merzbacher, who was never known to be a minute late for any hour since he entered college. The pair at once "start it up," regardless of the rest of the class, who gradually stroll in amid great confusion and many complimentary shouts of "O Goody," "You dirty toad," etc., etc., from behind the glass partition. In about five minutes, when the class is comfortably seated and the door closed, a terrible noise of thundering footsteps is heard in the hall, and Gerhard and Brinton, in frantic haste, chagrined at the thought of losing a word of the lesson, burst into the room like a cyclone and immediately make a dive for the only unoccupied chair, which stands in the far corner of the room. (Ask Gerhard why it was the only one.) Both arrive at the same time, which causes complications. "Gutsy" is compelled to notice the disturbance, and rushes up and down the room, waving his hands and exclaiming: "Gemmen, these are the most uproarious actions that ever occurred within these walls. I shall resort to the most severe measures. The clean shall be informed of this, gemmen," etc., etc. Gerhard knows his man, however, and saves the day by accusing Professor Gibbons of having removed the other chair, and by immediately bringing in one from Schwatt's room, and thus harmony protem is restored and recitation begins again.

Mills (reading at sight)—"There is a grove cast in the island of Oceani, and there is said to be in it a wagon covered with a vest."

Kriebel (a little shaky)—Soon the wagon and the vest, and, if you will believe it, the goddess herself are washed in secreted milk."

The class bursts into a roar. Jim Langstroth waves his arms about his head and slaps his thighs with great noise, while Gudey gives a prolonged "Tee-hee-hee-hee," and when quiet is at last obtained, viciously asks Kriebel if he has ever seen a goddess washing herself in "secreted milk." Wilbur blushes scarlet, which greatly tickles Gutsy, who, after explaining that "secrete [sic] lacu" means a "hidden lake," proceeds to translate the next passage himself, tinder the impression that it requires a scholar's judgment, and oh, the "hash" (a favorite word of his in translating—query, why?) he makes of it. Behold a sample exhibition of the result of his critical and philological acumen.

Gudey—"You may, ah, perceive, gemmen, that I have, ah, introduced a few emendations into this passage, which, ah, I blush for modesty, have never suggested before. Teuffelschwabewarich was, indeed, on the right track, but he died before he arrived at the remarkably simple and scholarly interpretation which it has, ah, fallen to my lot to present to you. I have examined seven thousand eight hundred and four similar passages in Tacitus, and have come to the unmistakable conclusion that whenever our author uses the word "facile" he meant to use "difficile," and wherever he has used the word "non," he meant to omit it. You will find a full discussion of this subject in my forthcoming monologue in the Americana-Germanica, of which you will all please procure copies and—"

But, alas, at this point poor Gudey's interesting "monologue" is cut short by a disturbance in the back part of the room, where it appears that Brinton has just succeeded in tying Gerhard firmly to his chair with a piece of clothes line. Gerhard resents the deprival of his liberty of action with loud shouts, and is immediately ordered to leave the room, which he at once proceeds to do with the greatest pleasure and alacrity, taking the chair with him. In fact, the situation grows quite dramatic, and peace is only restored by the severing of the ropes and the peremptory dismissal of Gerhard to the dean's office. Brinton soon follows, despite the efforts of Gutsy to restrain him, and they have scarce reached the stairs when the bell rings and the class is dismissed.

But now, gentle reader, let us drop for a moment the curtain of our imagination; let us imagine that stately Clio and the shade of Tacitus have left the "Muses palace," and that their places have been taken by Euterpe and the sweetly-piping Theocritus. Let us then fly thither on the wings of our fancy and visit for a moment more our old friend Gutsy. Things are pretty much the same as ever, but, alas, there is no Gerhard—ergo, there is little jollity. Merzbacher now cavils at pleasure over the weird constructions, which Gudey manufactures to excuse his many "lapsi linguae." Levett upsets his repeated "only occurrence of this word in all literature, gemmen," by numerous quotations containing the word in question. Brinton tickles him by reading the expurgated passages from his edition of 1610 (P.S. All expurgations, according to Gutsy, are needless, and generally contain "the pith of the whole passage"). Langstroth angers him by stating his opinion in a loud voice that the "bee" could not have stung Cupid on each finger, because, to his "positive knowledge," a bee can "sting once, and once only," and causes him to reply with the severest sarcasm: "Ah! Mr. Langstroth, but you must remember that this is a Theocritean bee."

This reply so worries Jim Langstroth that in revenge he resorts to his old trick of opening the door and rushing violently into the hall under pretense that he had heard some one knock, only to return with great noise five minutes later and spend another five in shutting the door, opening the window and getting fixed to his seat.

Thus it was that the hard hours with Gudey were whiled (?) away, and what would otherwise have been a very bitter pill was comfortably coated with the sugar of amusement.


Update: Thanks very much to Daniel Abosso, who found the following photograph of Gudeman, from Universities and the Sons: The University of Pennsylvania (1901): 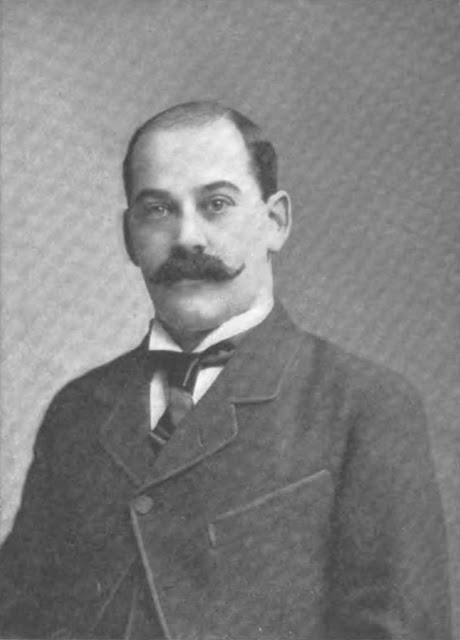