At the risk of destroying the effect of my pastoral which somehow or other is to reach you I must tell you what has turned up.

You remember Toper-na-fuosich, in the Map, on Loch Ericht and how I made out afterwards that Dallungart was the present name. Good reason why! for now that I from tender recollections of you and Shairp under the blanket together and of that Madonna like Mother and two children—now that I, I say, have published the name to all the drawing-rooms and boudoirs (of course) of all the world—What think you?—it turns out, they tell me, to mean what Horace calls 'teterrima belli causa'—7—O Mercy!—It is too ludicrous not to tell some one, but too appallingly awkward to tell any one on this side of the globe: in the Gath and Ascalon of the Antipodes you may talk of it, and laugh at your pleasure. Do you know too that in the boat on Loch Ericht I asked the boatman 1st where it was, and 2d what it meant. He replied, the bairds' well, which I could not understand. Did he mean the bairns' well, homunculorum fons et origo.8

8 The vexed question of 'some unseemly meaning in Gaelic' to be found in the original title of Clough's poem has been much commented on, but with little clarity. Clough took the name Toper-na-Fuosich from a map used in common by T.A. and Shairp in the summer of 1847, and by himself at a later date; he did his best to check the meaning, but got from a Loch Ericht boatman only the obscure English rendering, 'the bairds' well' [or 'bairds' well'?] W.M. Rossetti, in a review in The Germ, 1850, noted that '"The Bothie of Toper-na-Fuosich" means "the hut of the bearded well", a somewhat singular title, to say the least'. But before this it had been suggested, in a review in the Literary Gazette of 18 August 1849, that the name corresponded to Tobair na Feosag [or Tobar na Feusaig(e)], 'an ancient Highland toast to the female genital organs'. Modern Gaelic authorities seem reluctant to confirm any such derivation, or even the existence of such a toast; but it is clear from his comment here that Clough himself was convinced, a few months after the appearance of his poem, that such a meaning could be attached to its title; hence this elaborately oblique explanation to T.A., and the subsequent change to the (invented and meaningless) title, The Bothie of Tober-na-Vuolich.


As for the poor 'Bothie,' I was so disgusted with the mishap of the name, that I have never had pleasure in it since.

The anonymous Literary Gazette review is reprinted in Michael Thorpe, ed., Arthur Hugh Clough: The Critical Heritage (London: Routledge, 1972; rpt. 2002), pp. 49-52, but I don't see any reference there to an ancient Highland toast. Instead, all I see (p. 49) is:


A journal which boasts of its Horae Celticae cannot pass this most extraordinary title-page without observing that the author ought to have been more guarded against the malicious Gael who imposed it on the inquisitive Sassenach.


But as the doorway they quitted, a thin man clad as the Saxon,
Trouser and cap and jacket of home-spun blue, hand-woven,
Singled out, and said with determined accent to Hewson,
Resting his hand on his shoulder, while each with eyes dilating
Firmly scanned each: Young man, if ye pass through the Braes o' Lochaber,
See by the loch-side ye come to the Bothie of Toper-na-fuosich.

It is a vile jest, and it is lucky that it can only be understood by a few Highland worthies, who will no doubt enjoy a hearty guffaw over poor deluded Mr. Clough and his long-vacation pastoral near Lochaber, and (when rightly spelled) the Bothie of Tobair na Feosag, so well known in that country. 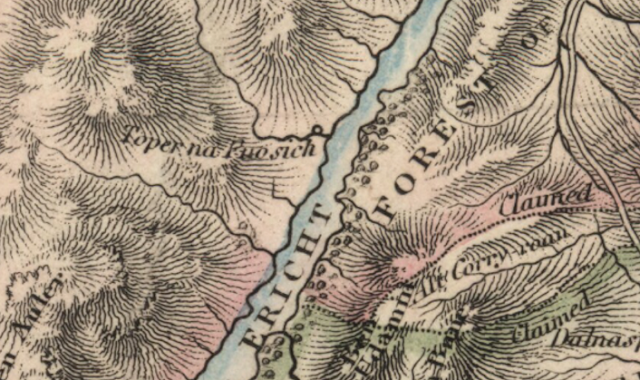