I move now to the most visible evocation of Arminius/Hermann in the nineteenth century, the great statue raised near Detmold in the Teutoburg Forest. Although it is not the German National Monument (that distinction belongs to the Niederwalddenkmal of Germania near Rüdesheim), it probably has the greatest resonance in the popular mind. Surprisingly, it is the dream and work entirely of one man, a sculptor named Ernst von Bandel, who, over decades, at great personal expense and suffering, produced a monumental statue which was dedicated, in the presence of the first German Emperor, in 1875, only a few years after the humiliation of France and the establishment, under the impetus of Bismarck, of a German nation.12

There is a grand view from the top of the steep hill, with a vast panorama of the thick forest. The spectator can then see all too clearly how Varus could have been waylaid. The approach to the Hermannsdenkmal, once the top of the hill has been achieved, is by a gently sloping path, which brings the visitor to the rear of the statue. It is a most imposing complex, some fifty metres high including the base; Arminius himself wears a winged helmet and holds his right arm aloft. His right hand holds a sword, raised on high, on the blade of which, on the two sides, are the inscriptions, Deutsche Einigkeit meine Stärke and Meine Stärke Deutschlands Macht (German unity is my strength, my strength is Germany's might.) The blatant nationalism expressed on the sword is a statement of the pride of the German Empire, a perfect expression of the mood of Bismarck's Germany. 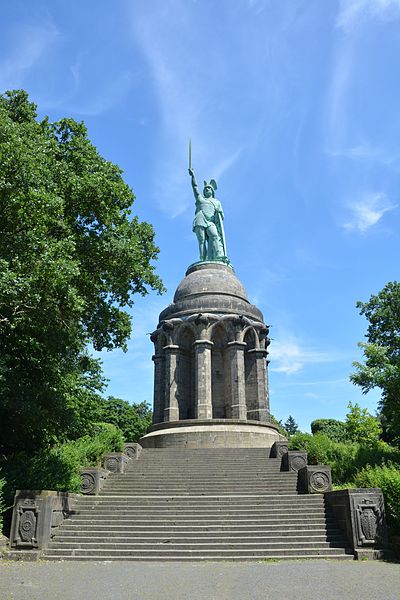 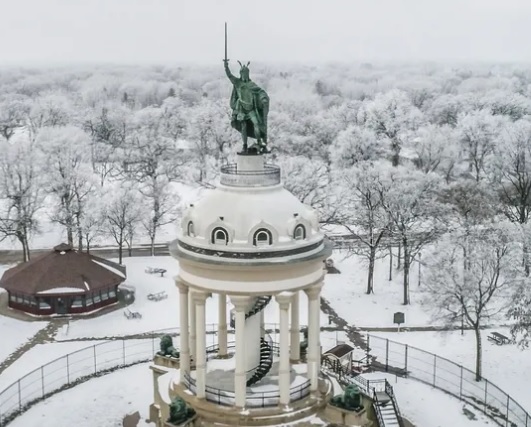