The word genuine originally referred to things that were natural or innate, rather than acquired or added later. In that sense, one explanation claims that it derives from gignere, a Latin verb meaning to birth or to beget, but a more imaginative (and no less likely) theory is that the word actually comes from genu, the Latin word for knee. According to this theory, a father would acknowledge the paternity of his genuine offspring by placing his child on his knee, and from there, the use of the word to mean authentic or real emerged. 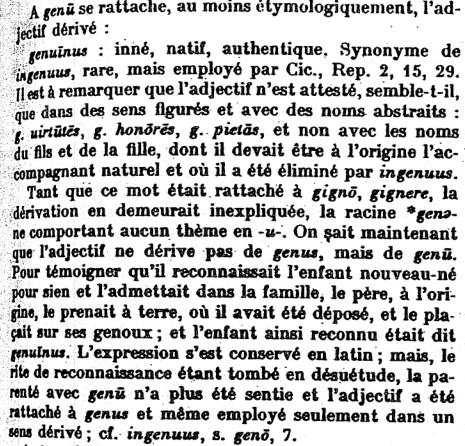 
Dens genuinus means "wisdom tooth" in our parlance, from a noun corresponding to γένυς, "jaw," literally "jaw tooth" or "cheek tooth," the same root as in gena. Seemingly the influence of folklore accounts for our word "genuine." People can be trusted after they have cut their wisdom teeth.

The same word γένυς sometimes meant the jaw with the beard on it. Hence ingenuus, "unbearded," "innocent," "ingenuous." Both of these words are usually assigned to a supposititious root genu- from gigno. Even so the semantic problem remains unsolved. The above explanations fit both form and meaning.

Michiel de Vaan, Etymological Dictionary of Latin and the Other Italic Languages (Leiden: Brill, 2008) accepts the derivation of genuinus from gena (p. 257), but connects ingenuus to gigno (p. 260).