The Harpies swoop down from some unseen place of destruction and snatch the food from my mouth. I have no strategy to help me. But when I long for a meal, I could more easily escape my own thought than I could escape them, so swiftly do they fly through the air. And if they ever do leave me a morsel of food, it gives off a powerful stench that is putrid and intolerable.


No monster
is more malevolent than these, no scourge
of gods or pestilence more savage ever
rose from the Stygian waves. These birds may wear
the face of virgins, but their bellies drip
with a disgusting discharge, and their hands
are talons, and their features pale and famished.


Here, if I may adapt Gibbon, the bombardier of the Royal Artillery may be of some assistance to the analyst of post-Homeric legend.

In 1941, the present writer was listening to a young sergeant describing his pre-War service in Egypt.

"When we were carrying our dinners from the cookhouse in our mess-tins, the kite-hawks used to swoop down and snatch them away before we could get them back to our barrack-rooms. And what's more, foedissima ventris proluvie omnem epularum apparatum taeterrime inquinabant." (I cannot remember the precise words of a frankly speaking vir militaris, but I feel that in any case they had best be confided to the decent obscurity of a learned language.) "We used to call them Shite-hawks."

I have come across nothing analogous elsewhere, though seagulls in Exmouth and Sidmouth have been known to snatch food almost from the hands of picnickers, and have also exasperated the municipal authorities by their droppings. 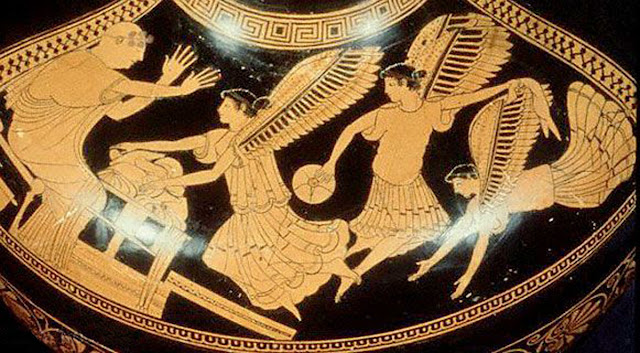