An ivy wreath is also used to separate two lines of verse on another grave stone with a slightly gruesome but moralising tone. A representation of a skeleton is carved in relief below the inscription, which reads:

Who can say, having looked at a fleshless corpse,
whether it was Hylas or Thersites, passer-by?

Hylas was a beautiful youth who set off with Herakles to accompany the Argonauts. He disappeared en route for, having been sent off to get water, he was seized by the nymphs on account of his beauty (Apollodorus 1.9.19). Thersites on the other hand was 'the ugliest man who went to Troy', according to Homer (Iliad 2.216). The implication of the epigram is that the fair and the ugly were equal in death. 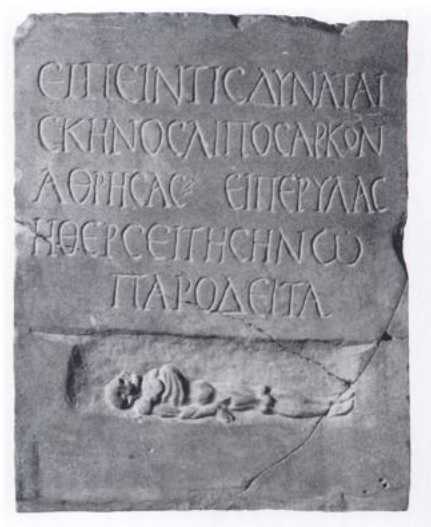 This is Inscriptiones Graecae XIV.2131 (undated, from Anzio, Italy).