Amulets in the shape of parts of the body (hand, phallus, vulva) were believed to have apotropaic efficacy.10 The use of the phallus as an amulet to protect against witchcraft was so common that the name fascinum, which means "a bewitching, or witchcraft" came to be applied to the membrum virile.11 The phallus even became deified as the god Fascinus. Babies were put under the protection of Fascinus12 (i.e., they wore an amulet in the shape of a phallus or fascinum); generals also were protected by this deity, for the image of a phallus was hung under the chariot of a general at his triumph to protect him from jealousy.13 The walls of towns, all kinds of public and private property, open and public squares, and tombs were protected in this way.14 A large number of amulets have been found at Pompeii "generally accompanied by phallic tokens of bronze, glass, lapis lazuli, and amber."15 The phallic symbol above the ovens in Pompeian bakeries perhaps had the same function. Best known is the one found in the bakery located at the corner of the House of Pansa at VI.vi.17-21. The rectangular niche in the curve above the oven once held a phallus of red travertine that had been painted red,16 accompanied by the legend hic habitat felicitas.17 The baker Sextus Patulcus Felix at Herculaneum took greater precautions. Over his oven door there were two phalli to protect his baking; two more were found in the dough-room.18 The front of the dye-furnace at the entrance of IX.vii.2 on the Via dell'Abbondanza is decorated with a winged phallus. There is a much larger phallus (48 cm. long) on the west side of the furnace. Various phalli are found on exterior walls at Pompeii,19 but the one at the street corner on the shop-house garden wall is unlike any found thus far.

19 A phallus above the entrance door served to identify a cella meretricia. 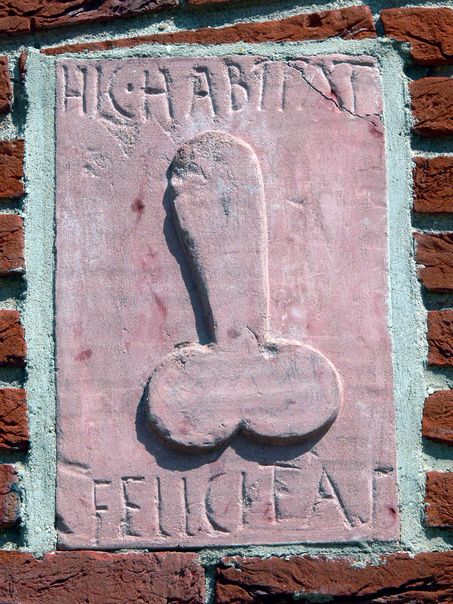