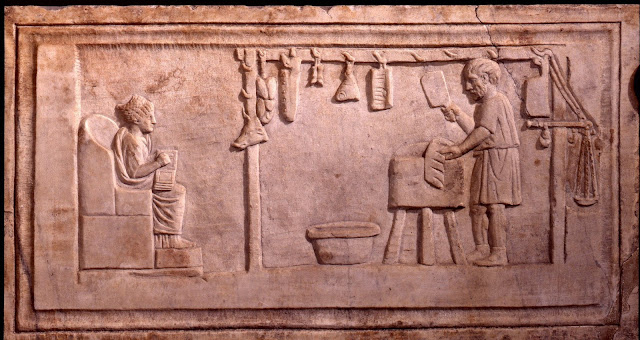 
The relief comes from a Roman tomb and has been dated by the woman's hairstyle to the second century A.D. A butcher is shown at work in his shop, with the choicest cuts of meat hanging up behind him. We must assume that his wife, shown to the left, is actually inside their house. She is sitting on a thronelike chair and seems to be writing on a diptychon (wax writing tablet). The hairstyle, clothing, and furniture suggest prosperity. We can see that the butcher was trying to emphasize the status he had attained, despite his less-than-prestigious profession. The sculptor endeavored to reproduce the different cuts of meat and the high standard of the shop as accurately as possible and also tried to convey the family's acquired wealth. The fact that the two spheres of life represented in the image are not clearly differentiated may tend to puzzle modern viewers.

Perhaps, as others have suggested, the butcher's wife is in the shop, keeping the accounts.