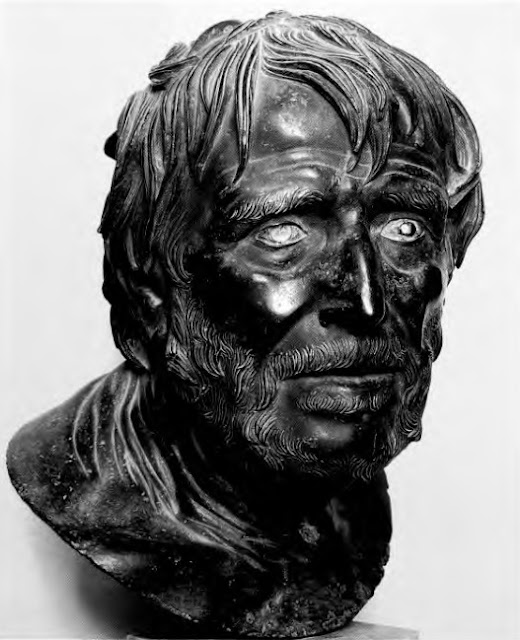 Fig. 11. Bronze bust from the Villa of the Papyri, the "Pseudo Seneca." Roman copy of a Greek original of the late third century B.C. We see an elderly Greek poet, his face lined by hard work, but with a vigorous expression. The identification of the portrait is uncertain: it may be an image of the "peasant poet" Hesiod. The torso is unfortunately missing, which is all the more regrettable because the bust, which was intended for insertion into a herm, suggests that it would have been a tour de force of realistic art. Naples, Museo Archeologico Nazionale.

Paul Zanker, The Mask of Socrates: The Image of the Intellectual in Antiquity (Berkeley: University of California Press, 1995), pp. 150-154 (notes and figures omitted):


There is a whole series of these retrospective images of great men of the past among the Roman copies of Hellenistic intellectual portraits. But unfortunately, as is so often the case, for almost all of them only the head is preserved, thereby severely limiting our ability to interpret them. This is true, for example, of the most problematic case, a portrait that was once taken to be Seneca and has thus acquired in the archaeological literature the rather odd nickname of Pseudo-Seneca. We are fortunate that the superb copy in a bronze bust from the Villa dei Papiri in Herculaneum (fig. 80a–c) gives at least a hint of the body type. The head represents a complete break with the traditional aesthetic of Classical art. Among Hellenistic portraits, apart from the statue of the Cynic in the Capitoline (cf. fig. 72), there is no other even remotely comparable to this one in its unrestrained rendering of passion, old age, and dishevelment. Rather, the closest comparison might be with the roughly contemporary statue of the pitiful old fisherman, which may give us some idea of the realism with which the poet's desiccated body must have been depicted. Peter Paul Rubens already combined the portrait with the fisherman's body, even though he was aware of the head that went with it. If the large number of copies of the Pseudo-Seneca, one of them a double herm together with Menander, did not guarantee that he must represent one of the most famous Greek poets, we might have suspected that the type is not a portrait at all, but rather a genre figure.

The hair falls over the brow in straggly locks. This is not, however, meant to express poetic inspiration or enthusiasm, as in other instances, but evidently the unkempt appearance of the peasant. This is particularly obvious at the nape of the neck, where the locks are caked with dirt and sweat, as well as in the crudely trimmed and irregularly growing beard. This last detail is a clear allusion to the iconography of the peasant, as we have seen in our discussion of the portrait of Chrysippus (p. 112). In pseudo-Aristotelian physiognomic theory, peasants and fishermen were marked by their irregular beards (along with other negative traits) as ridiculous and even as morally inferior beings. In the bronze bust of the Pseudo-Seneca, this trait is only hinted at, but enough to evoke the imagery of fishermen and peasants, with their negative connotations, when contrasted with the beards of contemporary philosopher portraits (excepting Chrysippus, of course). This impression is reinforced by the leathery skin, dried out by the sun, forming ugly furrows on the neck and shoulder, as well as by the shriveled body with bones protruding in face and neck.

But this old man is in no way characterized as sick or dispirited. Instead, he is filled with a passionate energy. The tension in the forehead and eyebrows suggests extreme concentration, as he searches for just the right word. There is something compelling in his expression, as if he just has to express himself, as if something is driving him that is stronger than he is. But who would listen to this unkempt old man, an outsider in polite society?

As in the case of the seated singer, this portrait seems to aim at capturing a specific set of biographical data, at rendering in its particular pathos a specific and unmistakable spiritual physiognomy comprising these elements: manual labor, poverty, a disregard for personal appearance, and a breathless, almost fanatical manner of speech. All this seems to point to the peasant-poet Hesiod, who was called to poetry by the Muses while he was tending his goats on Mount Helikon and who lived and, in his verses, described a life of inexorable toil, worry, and disappointment. That later ages did indeed imagine Hesiod as an old man is confirmed by Vergil, who evokes him as the "old man from Ascra" (Ecl. 6.70: Ascreus senex).

But I am less concerned here with the identification of the portrait, which must remain a conjecture until an inscribed copy is discovered, than with the boldly rendered "biographical physiognomy" of this old man. One of the great poets of the past is presented with the physiognomic traits of the peasants and fishermen who had always been despised by bourgeois society and had to struggle to eke out a living. This is more than just a retrospective, literary portrait of a poet. Rather, like the silen's mask of Socrates and, later, the portrait of Chrysippus, it is a polemical statement of the independence of intellectual talent from noble birth or societal convention. Even a man who stood on the margins of society, who did not have the benefits of paideia, could become a great poet. And again, a body worn out by toil and privation could still harbor a great spirit. Neither humble birth nor manual labor could rob this man of the power of the poetic word. An image like this implies a fundamental challenge to prevailing norms and values, even if only retrojected into the distant past.