God! Good Fortune! Zeus lord over Dodona I send this gift to you from me: Agathon, the son of Echephylos, and his offspring, proxenoi of the Molossians and their allies throughout thirty generations from Troy, the race of Kassandra, Zakynthians. 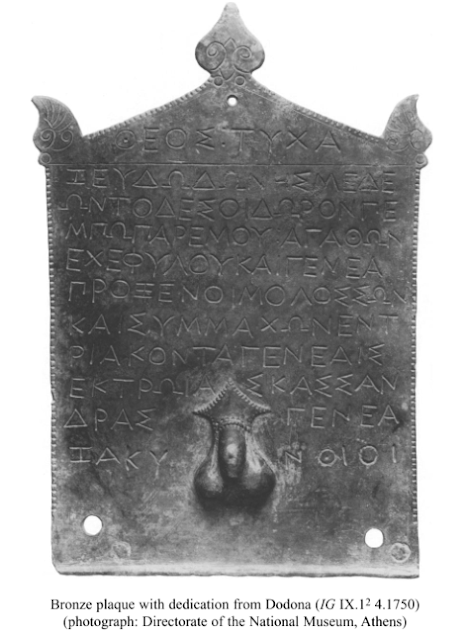 
We must next ask what especial importance Agathon attached to what is, after all, the most conspicuous feature of the plaque, the male genitalia. This has mostly been left unexplained (as by Egger and Christ) or taken as apotropaic (by Herter) or explained as an oblique way of referring to the rape of Kassandra by Ajax, but these latter alternatives, as we have seen, face substantial difficulties. On the other hand, Greifenhagen's explanation that the organ represents the continuing life-force of the Trojan stock of Agathon, is no doubt correct up to a certain point. However, if it is to be regarded as the total explanation, then the life-force must be that embodied in the thirty generations of descent from Kassandra. But the barren figure of Kassandra cannot seriously be understood as representing that force. Can we then alter the point of reference of the life-force, and yet preserve its essential significance? The answer seems straightforward. If the life-force is that embodied in the thirty generations supposedly descended from Kassandra, the only individual to whom it can specifically refer is Agathon: it is as the symbol of his own role that the phallus is represented, for it guarantees the future of the γενεά. It is then looking no less to the future than the past.

That may seem a sufficient answer to our γρῖφος. There is, however, a more recondite possibility, which would add a more allusive point to the riddling gift, but yet retain the concept of the life-force. Helenos and Kassandra, the children of Priam, were, we have seen, twins, δίδυμοι. Agathon the Zakynthian could effectively indicate pictorially that he was linked to both of them by representation of the genitalia, and especially the very prominent testicles, which indeed might seem to take pride of place, in Agathon's concept, to the organ itself. The explanation of this requires an excursion into the realm of anatomical vocabulary.

Galen tells us that Herophilos, the great Alexandrian anatomist, called both the testicles and the ovaries δίδυμοι, and so, not surprisingly, did others. I have pointed out elsewhere that Herophilos liked to take the terminology of his anatomical vocabulary from items of everyday life, according to their resemblance to the part of the body that he wished to illustrate. Here, then, perhaps, is an instance slightly earlier than that of Herophilos. Agathon drives home his kinship with the Trojans and the Molossians by the physical representation of the 'twins' which lie at the root of human continuity, whether they represent Kassandra and Helenos or Kassandra and Agathon.