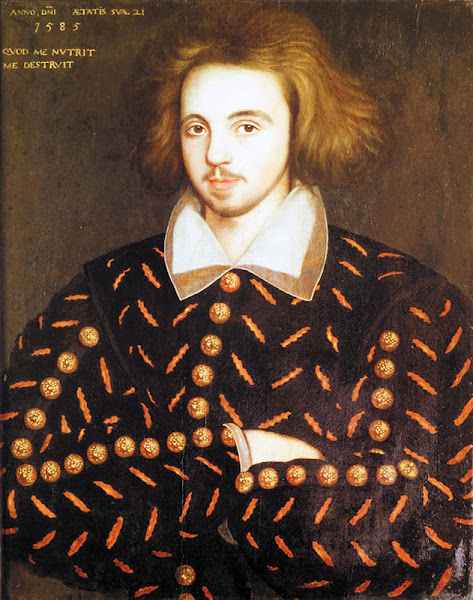 The book was very useful though for my thinking on Tamburlaine. The inscription on the presumed portrait of the young Marlowe, discovered in the fifties, reads, 'Quod me nutrit me detruit' — 'that which nourishes me destroys me.' An excellent motto for Tamburlaine; and for Marlowe.

Love, too, is the complaint that afflicts the melancholy youth in the portrait sometimes called 'Christopher Marlowe' at Corpus Christi College, Cambridge. Here again the arms are crossed and the sable-clad sitter is accompanied by a doleful motto: Quod me nutruit me destruit (that which nourishes me destroys me). The latter is a variant of a well-known device in Paradin's Devises Héroïques taken by the Lord of St Valier for a certain noble womans sake, willing to insinuate hereby, that as her beautie and comelines did please his minde, so might it cast him into danger of his life.17

Through the darkness, under a brilliant spotlight, the enigmatic portrait of the anonymous young man glows like an icon in the dining hall of the Cambridge college where I grew up. After more scrutiny, this late-Tudor treasure, painted on wood, will furnish two dates — Aetatis suae 21 Anno Domini 1585, the sitter's age, plus the year in which he was posing — and a sombre, transgressive motto, Quod me nutrit me detruit, meaning, 'That which nourishes me also destroys me.' [....] In the England of 1585, his inky costume alludes to Machiavellian thought, atheism and fashionable melancholy. Quod me nutrit me detruit. What unrequited love does this effeminate youth refer to? What existential torment? Who is he, and what are his circumstances?