What Shall I Do With Bob My Boy?

Martial 5.56, tr. in The Epigrams of Martial. Translated into English Prose. Each Accompanied by One or More Verse Translations, From the Works of English Poets, and Various Other Sources (London: Henry G. Bohn, 1890), p. 250:

To what master to entrust your son, Lupus, has been an anxious object of consideration with you for some time. Avoid, I advise you, all the grammarians and rhetoricians; let him have nothing to do with the books of Cicero or Virgil; let him leave Tutilius1 to his fame. If he makes verses, give him no encouragement to be a poet; if he wishes to study lucrative arts, make him learn to play on the guitar or flute. If he seems to be of a dull disposition, make him an auctioneer or an architect.

1 A rhetorician, whose daughter Quintilian married.

Some translations of the same in verse (id.):

Whene'er I meet you, still you cry,
"What shall I do with Bob my boy?"
Since this affair you'd have me treat on,
Ne'er send the lad to Paul's or Eton.
The Muses let him not conﬁde in,
But leave those jilts to fate or Dryden.
If with damn'd rhimes he racks his wits,
Send him to Mevis or St Kit's.
Would you with wealth his pockets store well?
Teach him to pimp or bolt a door well:
If he 'as a head not worth a stiver,
Make him a curate or hog-driver.         Tom Brown

You on one great concern your thoughts employ;
Still asking how to educate your boy.
First, carefully avoid, if you are wise,
All Greek and Latin masters, I advise.
Let him both Cicero and Virgil shun,
Unless you wish him to be quite undone.
Then, of a lad you never can have hope,
Who verses makes, or reads a line in Pope.
If he in gainful business would engage,
Teach him to sin or play upon the stage.
Or if he is too dull to be a player,
Teach him to job, and he may die a mayor.         [William] Hay 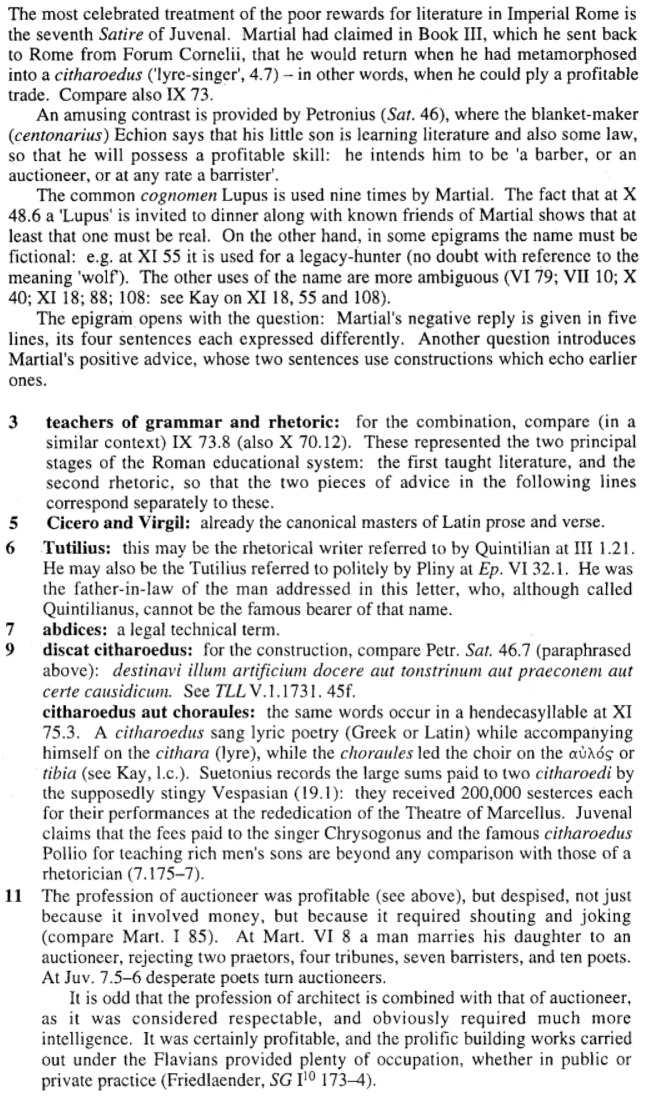 I am appalled, even horrified, that you have adopted classics as a major. As a matter of fact, I almost puked on my way home today.

I am a practical man, and for the life of me I cannot possibly understand why you should wish to speak Greek. With whom will you communicate in Greek?

I suppose everybody has to be a snob of some sort, and I suppose you will feel that you are distinguishing yourself from the herd by becoming a classical snob. I can see you drifting into a bar, belting down a few, turning around to the guy on the stool next to you—a contemporary billboard baron from Podunk, Iowa—and saying, "Well, what do you think of Leonidas?" He will turn to you and say, "Leonidas who?" You will turn to him and say, "Why, Leonidas, the prominent Greek of the twelfth century." He will, in turn, say to you, "Well, who the hell was he?" You will say, "Oh, you don’t know anything about Leonidas?" and dismiss him. And not discuss anything else with him for the rest of the evening. He will feel that you are a stupid snob and a fop, and you will feel that he is a clodhopper from Podunk, Iowa.

There is no question but this type of useless information will distinguish you, set you apart from the doers of the world. If I leave you enough money, you can retire to an ivory tower and contemplate for the rest of your days the influence that the hieroglyphics of prehistoric man had upon William Faulkner.

I think you are rapidly becoming a jackass and the sooner you get out of that filthy atmosphere, the better it will suit me.