Here is an image of the fragment: 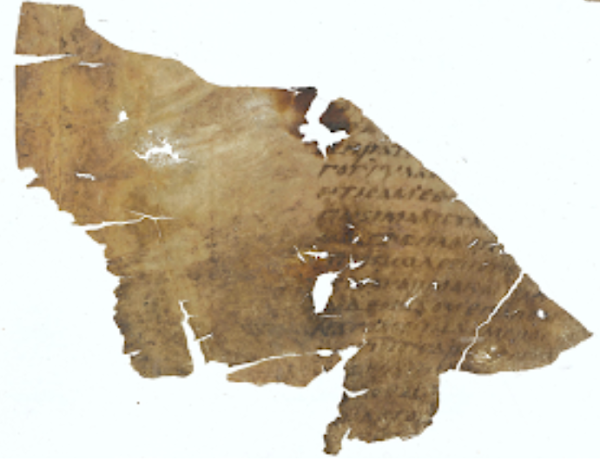 is seriously offered as a poem, there is some justification for the plain reader and orthodox critic who are frightened away from anything which may be labeled 'modernist' either in terms of condemnation or approbation. Who or what is Gongula? Is it a name of a person? of a town? of a musical instrument? Or is it the obsolete botanical word meaning 'spores'? Or is it a mistake for Gongora, the Spanish poet from whom the word 'gongorism' is formed, meaning "an affected elegance of style, also called 'cultism'?" And why "Papyrus"? Is the poem a fragment from a real papyrus? Or from an imaginary one? Or is it the poet's thoughts about either a real or imaginary fragment? Or about spring too long because of the gongula of the papyrus reeds? Rather than answer any of these questions and be driven to the shame-faced bluff of making much out of little, the common-sense reader retires to surer ground. Better, he thinks, presumably, that ten authentic poets should be left for posterity to discover than that one charlatan should be allowed to steal into the Temple of Fame. The plain reader objects to the idea of charlatanry in poetry more than he objects to the idea of stupidity, excess of learnedness, or honest inferiority: charlatanry being dishonest superiority. 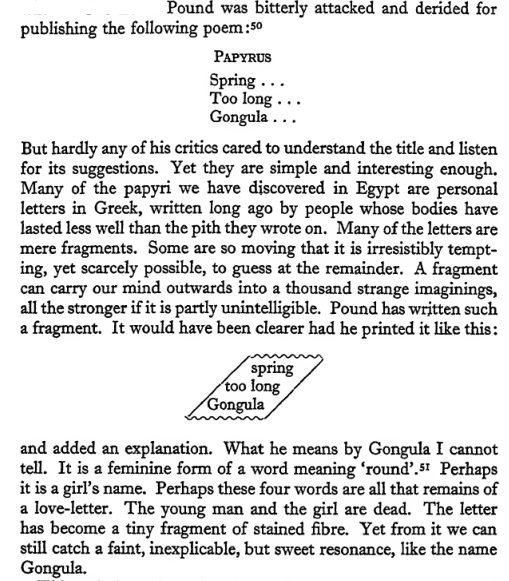 Pound was bitterly attacked and derided for publishing the following poem:50

But hardly any of his critics cared to understand the title and listen for its suggestions. Yet they are clear, and boldly imaginative. Searching through the ruins of what were once Greek-speaking villages in Egypt, scholars have found many heaps of papyri miraculously preserved for fifteen or twenty centuries (see p. 468). Most of the writings on these papyri are not literary: they are letters, or school exercises, or tax-sheets. But occasionally we find poems or prose pieces by famous authors. Sometimes these are works which vanished in the Dark Ages and had been given up for lost. Sometimes they are merely fragments—yet precious, like the hand or head which is all that remains of a lost masterpiece of sculpture. A few words on a torn sheet of papyrus may be all that we can recover of a great poem; but they speak in the accents of immortality.

Now, the word Gongula occurs twice in poems by the exquisite Greek lyricist Sappho.51 It was the name of one of Sappho's pupils. We know scarcely anything about her, except that she was dear to Sappho. What Pound has done in this poem, therefore, is to write four words containing something of Sappho's own feeling for nature, something of her passionate yearning, and the name of one of those she loved. He has created a fragment of a poem which Sappho herself might have written.

50. Papyrus occurs in Pound's Lustra, a collection of short poems containing many adaptations of classical models. 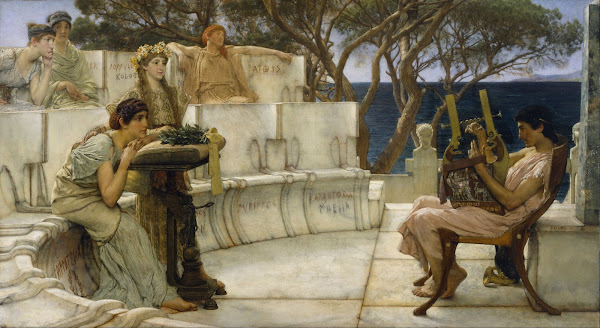