There is also a very interesting piece of evidence to show that King Theoderic himself, and one of his successors, continued to feel different from their Roman subjects, almost certainly because they still felt 'Gothic'. The only certain representation that we have of Theoderic is on a gold medallion, known as the 'Senigallia medallion' (Fig. 4.2). He is shown here in very Roman mode: identified by a Latin inscription and Roman titles; wearing a cuirass and cloak (in the manner of contemporary coin portraits of east-Roman emperors); and bearing an orb surmounted by a Victory. But he is also shown with long hair covering his ears, and, most significantly, with a moustache. There is no representation that I know of, from any century, that shows a Roman, or indeed a Greek, with a moustache (unless it is accompanied by a beard); and there is not even a word in the Latin language for 'moustache'. Contemporaries, whether Romans or Goths, will have interpreted Theoderic's moustache as a sign of his un-Romanness, indeed of his Gothicness; and, in doing so, they will surely have been right. As late as 534–6, one of his successors, Theodahad, is also shown on coinage sporting a prominent moustache (Fig. 4.3). Theodahad, according to Procopius, was an unwarlike man, learned in Latin literature and Platonic philosophy; in these respects he had clearly moved towards 'Romanness'. But even the learned Theodahad kept his Gothic moustache.20 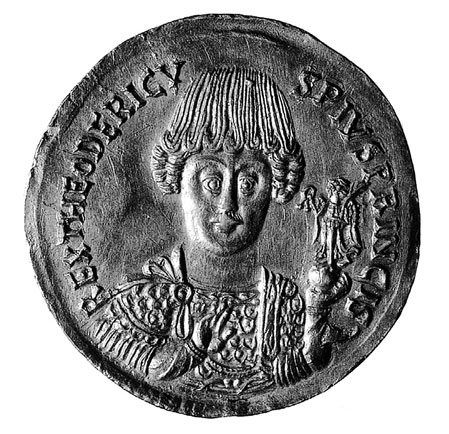 4.2 Gold medallion with the bust, and in the name, of Theoderic. The inscription on the reverse, 'King Theoderic victor over foreign peoples' (victor gentium), is an implicit claim that the Ostrogoths were less foreign, and therefore more Roman, than other Germanic tribes. 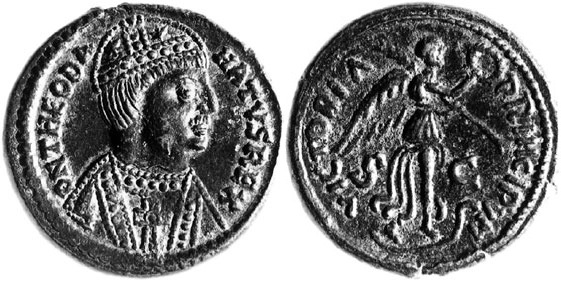 4.3 A philosopher-king with a Gothic moustache. Copper coin of the Ostrogothic king Theodahad (534–6). The design on the reverse is closely modelled on coins of the first century AD, down to the claim that this was issued 'by decree of the Senate' (Senatus consultu, the 'SC' that appears on either side of the Victory).

20. Senigallia medallion: W. Wroth, Catalogue of the Coins of the Vandals, Ostrogoths and Lombards . . . in the British Museum (London, 1911), 54. Amory, People and Identity, 338–46 is wrong to assume that a moustache alone (as worn by Theoderic and Theodahad) is the same as a beard-with-moustache (which some Romans did wear). Theodahad’s coins: Wroth, Catalogue, 75–6. Theodahad’s learned nature: Procopius, Wars, V.3.1.