For many years Shelley's death was believed in England to be attributable to the accidental oversetting of his craft; but this belief has never been shared by his descendants; and the poet's friend who recovered the boat — she was found some two miles away, off the coast of Via Reggio — has stated that the cause of her loss was at once apparent; her starboard quarter was stove in, evidently by a blow from the bows of a felucca; and being undecked, and having three tons and a half of iron ballast, she would have sunk in two minutes. An Italian seaman recently confessed that he was one of those who ran down Shelley's boat, believing that Lord Byron was on board, and that his lordship would pay a heavy ransom for his rescue; and this man stated that the moment the vessel struck, Shelley's craft went down. Several attempts have been made to throw discredit upon this story, for whose accuracy no one could vouch; but as regards the running down, Shelley's relatives have always believed it, though they imagine it was probably the result of a misadventure. Besides the hole discovered in the boat, many circumstances in the attitude of the poet himself confirm the belief that his death was not the result of the accidental oversetting of the boat, but of a collision. Firmly clasped in the hand of Shelley when the boat went down was a copy of Æschylus (not of Keats's poems). Shelley was passionately enamoured of Æschylus, and was apparently reading him at the very moment when the vessel was struck, an occupation which would not have engaged him if the vessel had at that moment been in imminent peril from the storm. There was a volume of Keats in his breast pocket, but the volume of Æschylus, as already intimated, was in his hand, and with the finger clasped in its pages. The volume still opens at the page where Shelley had been reading when the storm arose, and the print of his finger is still to be perceived upon the page. The book was in his hand when the body was found, and it was taken from him by Mr. Trelawny as he laid him on the pile for the burning: the volume remains in the possession of Sir Percy Shelley.

This may be a fanciful and embellished account of Shelley’s drowning, but even so it is a pity we are not told at which print-bearing page Shelley's Æschylus opens. What passage was he reading when disaster struck? 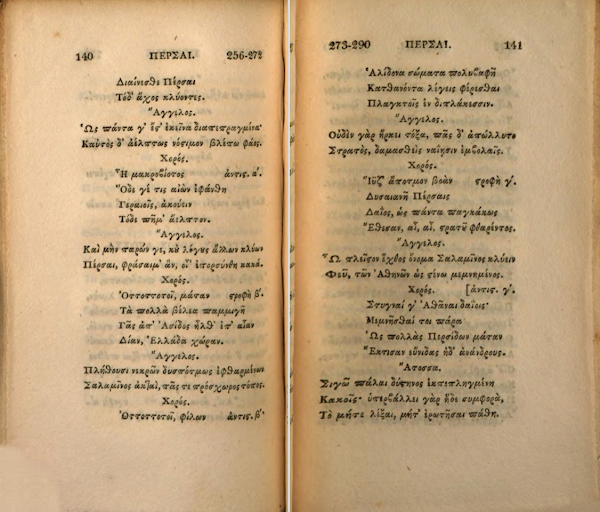 In the last line of p. 140, the Chorus in The Persians laments ὀτοτοτοῖ, φίλων, continuing on the following page,

Alas, alas! You say that the bodies of our loved ones,
battered by the brine and drenched, are tossing,
washed back and forth among the reefs. (tr. Herbert Weir Smyth)

31… a very late comment by Trelawny: "All parts of the body not protected by clothes were torn off by dog-fish and other sea-vermin, even to their scalps; the hands were torn off at the wrists (Records [of the Last Days of Shelley and Byron], p. 310). Trelawny makes this statement — which strongly counteracts the angelicizing process — to refute another writer's claim that Shelley's body was found grasping a book, even though Trelawny himself was guilty of creating confusion over the reading matter found upon the poet's person. As Hunt informed a friend in his letter announcing Shelley's death, "in S's pocket … a copy of Keats's last volume which he had borrowed of me to read on his passage, was open and doubled back” (quoted by White, The Unextinguished Hearth, p. 322). A letter by Byron makes clear the book's importance given the state of the body: "Shelley's body has been found and identified (though with difficulty) two days ago — chiefly by a book in his Jacket pocket — the body itself being totally disfigured & in a state of putrefaction." (Leslie Marchand, ed., Byron's Letters and Journals, 12 vols. [Cambridge, Mass.: Belknap Press of Harvard University Press, 1973-82], Ix, 185.) Trelawny's Recollections expands upon the detail of the book: "The tall, slight figure, the jacket, the volume of Sophocles in one pocket, and Keats's poems in the other, doubled back, as if the reader, in the act of reading, had hastily thrust it away, were all too familiar to me to leave a doubt on my mind that this mutilated corpse was any other than Shelley's" (p. 123). Trelawny's description — in contrast with Byron's — certainly makes Shelley seem bookish and impractical (and therefore potentially angelic) even in death; on the other hand Trelawny invents the Sophocles volume (Aeschylus in the 1878 Records [of Shelley, Byron and the Author]) presumably as a necessary counterweight to the "mutilated corpse." On the volume of Sophocles as an embellishment by Trelawny, see Marchand, "Trelawny on the Death of Shelley," 17.

It is slightly puzzling why, if the memory of the clutched Aeschylus first surfaces in Trelawny’s 1878 Records, the volume is already present in George Barnett Smith’s biography of 1877. Personal communication may be one explanation. Alan Halsey, "The Text of Shelley's Death: a Mythopoeic Retrospective," in The Survival of Myth: Innovation, Singularity and Alterity, edd. David Kennedy and Paul Hardwick (Newcastle: Cambridge Scholars, 2010), pp. 152-167 (at 153), suggests that this particular piece of embroidery was actually Smith's:

From Trelawny alone it would be possible to derive eight or more tellings with significant differences to which we can add a few variants contributed by Captain Daniel Roberts. We need not look far for a motive underlying Trelawny's and Roberts' accounts: they were at least partly to blame for the unseaworthiness of Shelley's boat. Nevertheless, Trelawny is the source mined and embroidered by the later nineteenth century biographers: William Sharp, William Michael Rossetti, A. Clutton-Brock, Edward Dowden, and George Barnett Smith. Smith himself provides the wondrous embellishment of the copy of Aeschylus still clutched in Shelley's hand after eight or more days in the sea, a detail solemnly recorded in the Bodleian catalogue for several decades, albeit for a copy of Sophocles.

Whatever the case, it was probably the survival of the books themselves that gave the various confabulations traction. Shelley did own copies of both tragedians. The Aeschylus [Oxford, 1809: Bodleian, Shelfmark: [pr.] Shelley adds. gr 1] was exhibited in the Bodleian Libraries/New York Public Library exhibition Shelley's Ghost: Reshaping the image of a literary family (http://163.1.35.99/edition-of-aeschylus?item=214#Description). From the Catalogue Notes:

In the course of his long life Trelawny wrote numerous accounts of Shelley’s death and cremation, each one more dramatic and less reliable than the last. He did not record finding an edition of Sophocles in Shelley’s jacket pocket until 1858; in an account of 1878, this has turned into an edition of Aeschylus. Both a Sophocles and an Aeschylus may have been found by Trelawny after Shelley’s death but – less dramatically – in the trunk of belongings he had with him on board rather than in his jacket pocket. Although better preserved than the Sophocles, the Aeschylus seems to show signs of water damage such as its buckled binding.

Trelawny recalled giving Shelley's Aeschylus to Sir Percy Shelley. Perhaps it was the edition here, which has notes in Shelley’s hand. It is inscribed on the flyleaf: 'Belonged to P.B. Shelley / & was left to me / by his daughter-in-law / Jane, Lady Shelley. / J.C. Shelley-Rolls.' 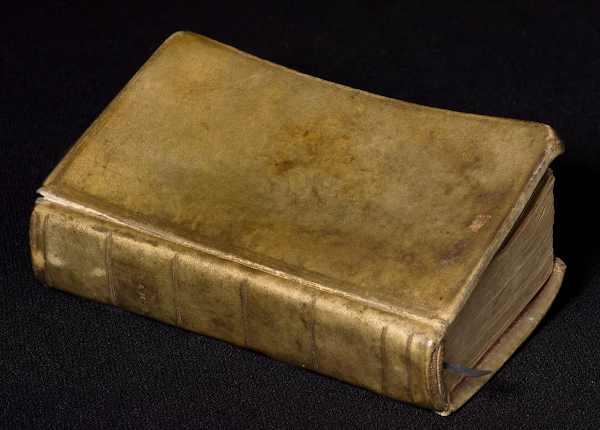 Shelley's verse drama and last published poem, Hellas, was written in Pisa the year before his death (1822), with a view to raising money for the Greek War of Independence.  As it was inspired by Aeschylus's The Persians, the poet is unlikely not to have read the prophetic lines of the Chorus on pp. 140-141 above in the months preceding his drowning, even if the book lay on a desk or table on dry land and not firmly clasped aboard the doomed Don Juan.