Robert Parker, Athenian Religion: A History (Oxford: Clarendon Press, 1996), p. 35 (I corrected the accent of ἅμιλλα in the footnote):

We learn from the Odyssey that Menelaus' steersman Phrontis son of Onetor, 'he who was most skilful among mankind at steering a ship, when the storm-winds blew hard', died and was buried at Sunium. That is perhaps an allusion to a cult of Phrontis that already existed at Sunium; and if not, the passage itself might easily have encouraged such a cult to arise. Near the temple of Athena at Sunium, a rich votive-deposit has been discovered, including a fine Proto-Attic plaque showing a ship with a very prominent helmsman. Is this Phrontis, and do these votives derive from the hypothetical cult? The suggestion is alluring.24

But when we came to holy Sounion, the cape of Athens,
there Phoibos Apollo, with a visitation of his painless
arrows, killed the steersman of Menelaos, the one who        280
held in his hands the steering oar of the running ship. This was
Phrontis, Onetor's son, who surpassed all the breed of mortals
in the steering of a ship whenever stormwinds were blowing.
So Menelaos, though straining for the journey, was detained
there, to bury his companion, and give him due rites.        285 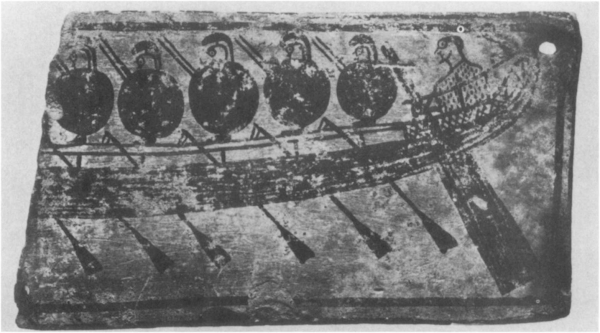