Throughout the year there were occasions on which the dead were commemorated by funerary meals eaten at the tomb by their relatives and friends—on their birthdays and when the annual festivals of the dead were celebrated (see pp. 61-4). The mausolea of the well-to-do often contained chambers for this purpose, sometimes equipped with kitchens (see Chapter V(G), p. 136). At all of these banquets, as at those held at the time of a death, the departed had their share set apart for them. Their disembodied spirits, it was thought, could somehow partake of the fare with which they were thus provided and, indeed, be nourished through the medium of their bones or ashes (cf. p. 37). Hence the fact that graves, whether for inhumation or for cremation, with holes or pipes through which food and drink could be poured down directly on to the burial (profusio), so as to reach the remains, are a not uncommon feature of cemeteries in very diverse areas of the Roman world. For example, in the necropolis excavated under St Peter's in Rome several instances have come to light. In Tomb F, inset into the border of a mosaic pavement, is a series of small, square marble slabs each pierced with a hole for pouring sustenance down on to the dead beneath; and there are similar holes in the mosaic pavement of Tomb C.183 In the floor of Tomb O there is a marble roundel pierced by four holes;184 and Grave γ, a child's inhumation burial of Hadrianic date, near the reputed tomb of St Peter, contained a terracotta coffin, partly encased in a rectangular block of masonry, which was penetrated by a vertical tube for pouring.185 Another child's inhumation burial, this time at Syracuse and with the bones laid directly in the earth under tiles set gable-wise, was connected with the surface by a vertical terracotta pipe, closed at the top by a movable stone stopper.186 A small stone, oblong chest from Faleroni, in Italy, containing a cremation burial and grave-goods in the form of glass vessels, ornaments, and so forth, bears in the centre of its lid a vertical leaden pipe.187 Among provincial examples are a lead sarcophagus for inhumation found at Colchester, near one end of the lid of which is a lead pipe passing down into the interior, where vessels of glass and pottery accompanied the bones;188 and a cremation burial from Caerleon in Monmouthshire.189 In the latter case the tomb consists of a horizontal slab of stone carrying a packing of rammed earth, on which stands a circular lead canister that contained the remains. The canister is walled round by slabs of stone; and between one wall and the slab that covers the canister is a lead pipe that leads down from the surface into the inside of the vessel (cf. pp. 37, 41, 101, 123). (Pl. 14) 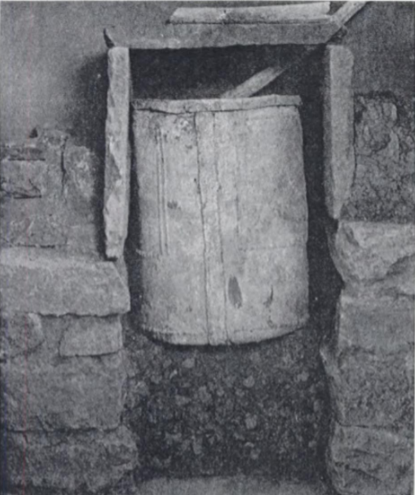 Above, cremation burial from Caerleon. The ashes are in a lead canister, walled and roofed by stone slabs, into which a lead libation pipe leads down from the surface (p. 52).

The Oxford Latin Dictionary, s.v. profusio, sense 1 ("The pouring out [of wine, etc.] in religious ceremonies, libation") cites only inscriptions for this meaning (CIL 5.4990; 10.107). Thanks to Kevin Muse for sending the relevant definition of the word from the Thesaurus Linguae Latinae: 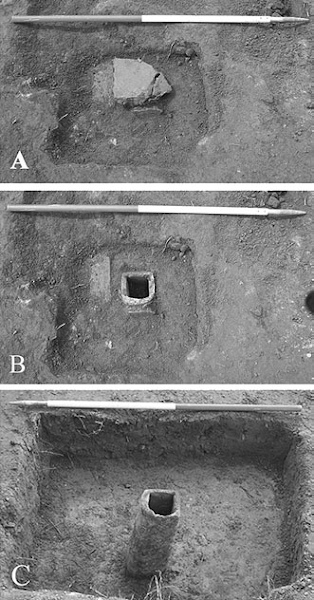 Libation tube made of a recycled box tile and covered with a flat tile above a cremation burial of the 2nd century ad at Vindolanda at three stages of excavation. The Vindolanda Trust