Relief of Antinous as Silvanus, signed by Antonianus of Aphrodisias, owned by Istituto Bancario Romano (inv. no. 418 A), on permanent loan to the Palazzo Massimo, Rome (inv. no. 374071): 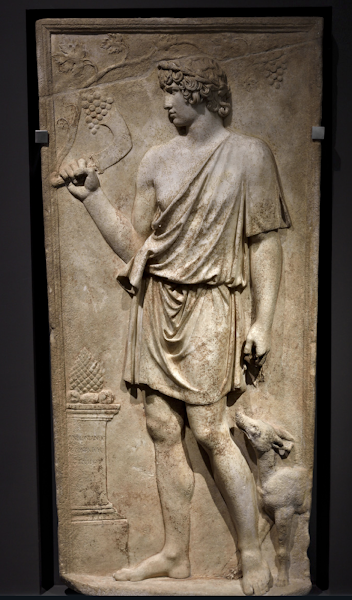 The latest discovery in connection with this subject was made on the farm of Torre del Padiglione, an estate of eight thousand acres, which the "Società Italiana de' Beni Rustici" has just purchased from the ducal house of the Massimo. This farm is crossed by two highroads, one leading from Lanuvium to Antium, the other from Rome to Satricum. Near their junction, on a knoll which rises some thirty or thirty-five feet above the level of the plain, among the remains of an ancient farmhouse, the bas-relief reproduced on this page was brought to light in October, 1907. The discovery came about by accident, while workmen were digging the earth to plant a vineyard on the southern slope of the knoll. The bas-relief lay face downward on a bed of loose earth, which seemed to have been sifted on purpose to receive and shelter the sculpture. It is not possible that it should have fallen into that position by accident on the occasion of a fire or of an earthquake. It must have been carried to the spot, outside the boundary of the house, and hidden with a purpose, at the time of the first barbarian incursions, by the servants of the house itself. We must not forget that Torre del Padiglione once formed part of the fertile territory of Lanuvium, as favorite a place for summer residence as Tusculum itself, where Antinous and Silvanus had been elected patron saints of the employees of the aristocratic villas, as I shall have occasion to mention again at length in the next chapter.

The portrait is carved in Pentelic marble, and it is as fresh and perfect as if it had just emerged from the workshop. The god-hero is represented as a young peasant attending to the vintage, the only sign of his apotheosis being a wreath of pine leaves, and the altar with the pine cone. The artist's conception was obviously to represent an Antinous-Silvanus. This artist, this producer of a panel deserving to be placed beside the Palestrina statue, the Mondragone bust, and the Albani bas-relief, has signed his name on the altar: "This is the work of Antonianus from Aphrodisias." These words mean that he belonged to that brotherhood of Greco-Roman sculptors which had opened a studio and a workshop on the Esquiline near the Sette Sale, discovered (and illustrated by Visconti) in 1878. For us, however, the appearance of this divine youth at the Torre del Padiglione, until lately a malarious and deserted spot, bordering on the Pontine district, almost out of reach of civilization, means something more: we take it as an omen of success in the struggle of the present generation against the two great evils of the Campagna, unhealthiness and depopulation. Surely it cannot be a trick of fate that on the day when workmen had been directed to that knoll to try an experiment in vine growing, Antinous should appear in the garb of a sylvan god, attending to the vintage, with bunches of luscious grapes hanging in profusion from his own vines.

On a relief from Torre del Padiglione (Lanuvium) Hadrian's Antinoos is represented as a gorgeous Silvanus, barefoot and clothed, with a dog at his feet. On the altar is a pine cone. In his right hand Antinoos Silvanus holds a pruning hook below a trailing branch of grape leaves and clusters.