The literature of nostalgia, while not voluminous, is of unusual interest and is largely from the pens of Swiss authors. The thesis herewith presented is generally accepted as the earliest publication on the subject, and it is in this work that the term "nostalgia" is first used. The author, Johannes Hofer, was born in Mühlhausen, April 28, 1669, and was graduated from the University of Basel in 1688. He was the author of "De Hydrope Uteri" and of this tractate, which was first published in 1688. It has gone through several editions but has never before been translated. The first reprint of this thesis appeared in 1710, as part of the "Fasciculus Dissertationum Medicarum Selectorium [sic, read Selectiorum]" of Th. Zwinger (Basel). The original title is changed to "De Pothopatridalgia vom Heimwehe." The text is almost identical with that of the first edition, although the term "nostalgia" is replaced throughout by "pothopatridalgia." Zwinger also has introduced an additional case history between the fourth and fifth chapters, has revised and re-arranged parts of the text, and in his twelfth chapter mentions a sweet melody of Switzerland which tends to produce homesickness in everyone who hears it. He actually gives the notes of this "pathologic air," which is called "Kühe-Reyen."

The reprint of 1745 is identical with the original edition, except that it carries the title, "Dissertatio Curiosa-medica de Nostalgia Vulgo: Heimwehe oder Heimsehnsucht quam in Perantiqua, etc." the remainder of the title being the same as in the first edition. The dissertation is also included in Haller's "Disputationes ad Morborum Historiam," Lausannae, 1757.

The very name presents itself for consideration before all things, which indeed the gifted Helvetians have introduced not long since into their vernacular language, chosen from the grief for the lost charm of the Native Land, which they called das Heimweh; just as those stricken with this disease grieve, either because they are abandoned by the pleasant breeze of their Native Land or because at some time they picture themselves enjoying this more. And hence, since the Helvetians in Gaul (France) were taken often by this mood, among that same nation it merited the name la Maladie du Pays.

However, it lacks a particular name in medicine, because from no doctor thus far had I learned that it was observed properly or explained carefully. Thus far I had been the first to consider that I should speak more fully concerning it, at the same time that I had first considered it necessary to apply a name. Also I knew just how much they had done all this before me, that it was incumbent upon me to explain certain new phases. Nor in truth, deliberating on a name, did a more suitable one occur to me, defining the thing to be explained, more concisely than the word Nostalgias, Greek in origin and indeed composed of two sounds, the one of which is Nosos [sic, read Nostos], return to the native land; the other, Algos, signifies suffering or grief; so that thus far it is possible from the force of the sound Nostalgia to define the sad mood originating from the desire for the return to one's native land. If nosomanias [sic, read nostimanias] or the name philopatridomania is more pleasing to anyone, in truth denoting a spirit perturbed against holding fast to their native land from any cause whatsoever (denoting) return, it will be entirely approved by me.

Her mistake in giving “Nosos” for “Nostos” (and “nosomanias” for “Nostimanias”) came, I imagine, from a lack of familiarity with the conventions of early modern printed Greek, which include a number of special symbols for ligatures. One of these is the symbol stigma or ϛ (used also for the number six), which represents στ. She must have confused it with the very similar symbol for final sigma, ς. (A couple of ligatures regularly give this kind of trouble because they look like something more familiar — I have often seen the ligature for ευ mistranscribed as ου.) 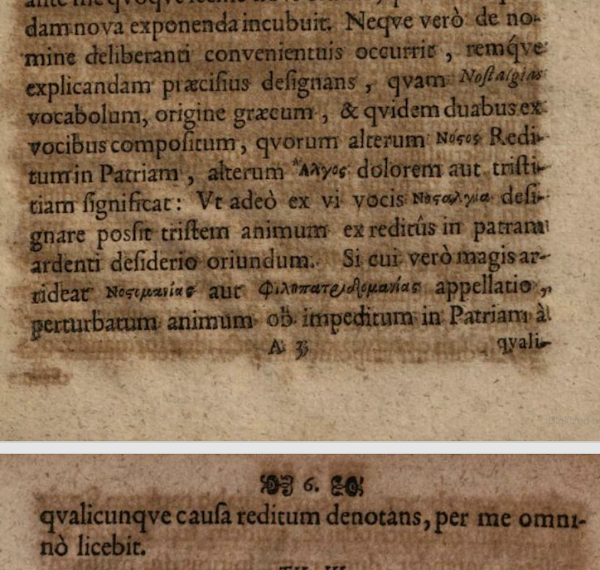