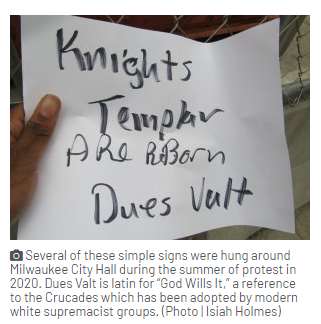 Several of these simple signs were hung around Milwaukee City Hall during the summer of protest in 2020. Dues Valt is latin for “God Wills It,” a reference to the Crucades which has been adopted by modern white supremacist groups.

I read "Dues Vult" on the sign. At any rate, the correct Latin is "Deus Vult" (also read "Crusades" for "Crucades"). On the war cry see e.g. Peter Frankopan, The First Crusade: The Call from the East (Cambridge: The Belknap Press of Harvard University Press, 2012), p. 3 (note omitted):

Bohemond, the son of Robert Guiscard, was another stellar recruit. According to the anonymous author of the Gesta Francorum, Bohemond first heard about the expedition when he was besieging Amalfi in 1096 and noticed men passing on their way towards the ports of southern Italy shouting ‘Deus vult! Deus vult!’