In Vol. I., 126 f., there is a discussion of a 'rhetorical peculiarity of Idg. poetry,' the peculiarity being that when there is a succession of three or four proper names, the third or fourth is provided with an epithet. A number of examples from Homer are given, four from Sanskrit Epic, and a like number from early Germanic verse. Finally, the author appears to think that he strengthens his case by giving as an example from Latin Erebumque Chaosque tergeminumque (sic) Hecaten. The device is admirably illustrated in the refrain of 'Widdicombe Fair,' and to claim Indogermanic origin for it does injustice to the ingenuity of later craftsmen.

The passage from Hirt: 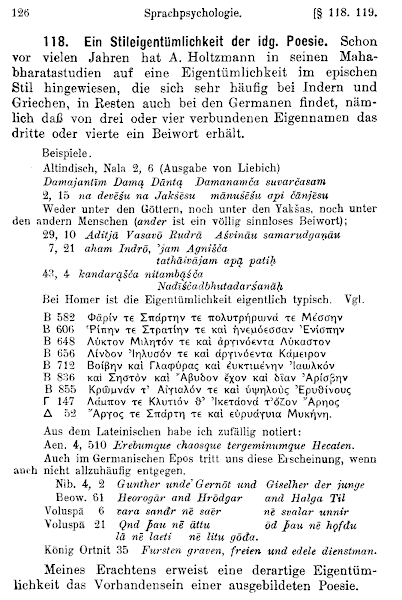 A special case of Behaghel's Law that is distinct and easily recognizable is what I call the Augmented Triad. It consists of the construction of a verse from three names (or occasionally other substantives), of which the third is furnished with an epithet or other qualification. I have devoted a paper to this topic and collected there numerous examples from the Vedas, the Indian epics, the Avesta, Hesiod and Homer, and the Germanic and Celtic literatures (West 2004). A few will suffice here by way of illustration. I can now add one from Hittite and a couple from Latvian.

There was not sand nor sea nor the cool waves. (Vọluspá 3)

In the Indian, Greek, Germanic, and Celtic traditions we often find such triadic lines within longer catalogues of names. Catalogues are typical of heroic poetry, as they are of genealogical and other antiquarian verse. They may have been a feature of Indo-European heroic poetry, and the augmented triad a traditional device in them.

Sometimes the trio of names is preceded by the announcement that they are three. There is one especially common type, where three sons are recorded as sprung from one father, for example:

But of Angiras, three sons renowned everywhere in the world:
Bṛhaspati and Utathya and Samvarta the resolute. (MBh. 1.60.5)

In these and in many other cases we have a more or less identical pattern: the words 'three sons', with the father's name in the genitive, with or without a verb such as 'were born'; a general qualification of the sons as 'fine', 'renowned', etc.; and then their individual names in an Augmented Triad.135

It is hard to avoid the inference that this was a traditional formula from the common poetic inheritance. Here we seem to find a remnant of the Indo-European storyteller's building work: a recognizable structural component, with the lineaments of its verbal patterning still in place.

There are also poetic features at play that point to inherited material of greater complexity than simple sounds and morphemes. The most obvious one concerns the entirety of verse [Iliad 2.]460. "Geese or cranes or long-necked swans" is a paradigmatic example of what is often known as Behaghel's Law, a stylistic figure named after the Germanist Otto Behaghel that was evidently part of the repertoire of the artful Proto-Indo-European: NOUNx, NOUNy, and/or [EPITHET + NOUN]z (in general, the number of syllables also increases from x to y to z). This figure (it is not a "law" at all) forms a subset of the Gesetz der wachsenden Glieder ("law of increasing members"), one of four general principles of discourse that Behaghel formulated in the first half of the twentieth century; West (2004 and 2007: 117-19), who notes that it is found with special frequency in the Catalogue of Ships (West 2004: 34-5), has now dubbed it the "Augmented Triad." The nouns are frequently proper names (as in Il. 1.145 ἢ Αἴας ἢ Ἰδομενεὺς ἢ δῖος Ὀδυσσεύς "whether Ajax or Idomeneus or godly Odysseus" (all three are vowel-initial; the list continues with further augmentation in the next verse and — for an early example outside epic — Alcm. Partheneion 75-6 Φίλυλλα Δαμαρ[έ]τα τ᾿ ἐρατά τε Ϝιανθεμίς "Philylla and Damareta and lovely Wianthemis" (Watkins 1995: 31 notes the phonetic effect in the middle of 76)) and in one other instance in Homer are names of birds: σκῶπές τ᾽ ἴρηκές τε τανύγλωσσοί τε κορῶναι "owls and hawks and long-tongued crows" (Od. 5.66). Examples abound in Indo-European poetry from India to Ireland, as documented by West (see also now Galjanić 2008: 138-43), who does not ignore the tricky matter of trying to square the idea that "Behaghel triads" are a poetic inheritance with a plausible picture of Proto-Indo-European meter, which for him involves, quite reasonably, hepta- and especially octo-syllabic sequences (West 2004: 44-5, 47-8, referring back to West 1973b). Also desirable are investigations into the status of these triads as a purely Indo-European phenomenon (is it really?) and also into their relationship with the wider Gesetz, whose rhetorical effects are said to be visible in languages all over the world and occur by no means just in poetry. One example among many from Ciceronian Latin of what classicists generally call a "rising tricolon" or a "tricolon crescendo" is si acerbe, si crudeliter, si sine causa sum a tuis oppugnatus "if I have been attacked bitterly, cruelly, without reason by your family" (Fam. 5.2.10); Morgan (1983), suggesting that triads of various kinds may be one of the "bas[e]s of a grammar of folk-poetry" (55), gives examples of triads of various kinds in Sumerian, Egyptian, and Biblical Hebrew, as well as in Indo-European languages, ancient, medieval, and modern.

See also J.P. Oakden, "The Survival of a Stylistic Feature of Indo-European Poetry in Germanic, Especially in Middle-English," Review of English Studies, Vol. 9, No. 33 (January, 1933) 50-53.


Some New Testament examples, thanks to Joel Eidsath: