Home of Eber and Raps

Thanks to Eric Thomson for these photographs of the so-called Temple of Concordia in Agrigento, Sicily: 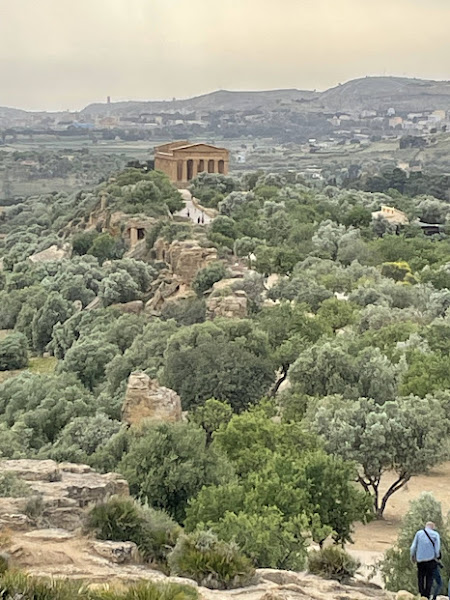 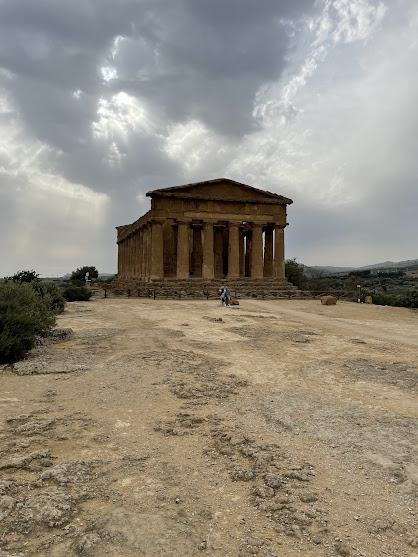 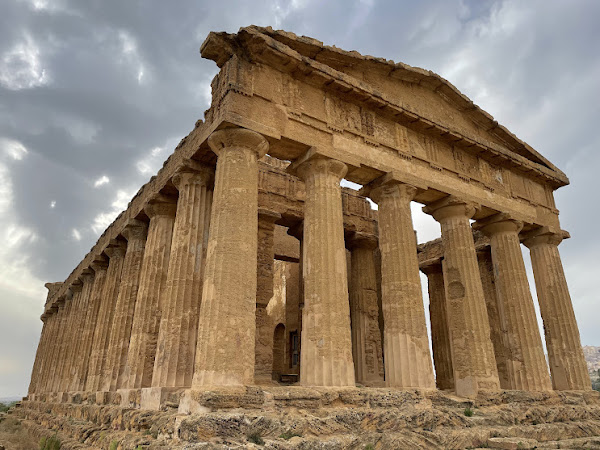 From the Temple of Juno, head down the Via dei Templi in a westward direction and you'll reach the so-called Temple of Concordia. The identification is actually false and was formulated on the basis of a marble inscription from the first Roman imperial period (mid-1st century AD) with a dedication in Latin that reads CONCORDIAE AGRIGENTINORUM SACRUM [...]. The inscription, now preserved in the "Pietro Griffo" Regional Archaeological Museum, was observed in Agrigento by the Dominican historian and theologian Tommaso Fazello (1498-1570), who related it to a "temple not far from that of Hercules" in De Rebus Siculis decades duae.

Since then, the temple has been indicated as dedicated to Concordia, in spite of the fact that scholars have for some time now held that the inscription is unrelated to it, and should instead be referred to a lost artefact, perhaps a statue or an altar. The deity to which the edifice, which was built in the second half of the 5th century BC, was originally dedicated is still unknown today. Many hypotheses have been advanced by the experts, none of which has been proven; nonetheless, they all have one element in common, that is, they identify two gods as having been destined for worship. Hence, the Dioscuri, the twins Castor and Pollux, sons of Leda and Zeus (in Greek Dioscuri means "sons of Zeus", the Jupiter of the Romans), at times Hercules and Mercury, at others Hercules and Triptolemus. It is also worthy of note that a double dedication is suggested for the temple, not so much based on the events that involved the building in ancient times (which we have no knowledge of), but rather on those that occurred later when, in the late 6th century AD, the temple was turned into a Christian church consecrated to Saints Peter and Paul. The artificer of this transformation and ensuing dedication was Gregory, Bishop of Agrigento from 591 to 630, after he had liberated the ancient building from the demons of Eber and Raps, who had chosen to dwell in the temple, as reported by the monk Leontius in Vita del vescovo agrigentino Gregorio (Life of Saint Gregory, Bishop of Agrigento). In essence, there are some scholars who, going back in time, wonder if there could be a relationship berween the dedication to two saints, Peter and Paul, and the older one, as would be suggested by the news of the pair of demons expelled by the bishop. As we await further discoveries to be made, the large and best-preserved temple on the hill of ancient Agrigento continues to be described as dedicated to Concordia.

Built between 440 and 430 BC from local limestone, the Doric temple (19.75 x 42.23 metres) rises up on a tall four-step crepidoma, which in turn lies on a massive foundation created to even out the earth below it. The temple has six columns on each of its short sides, and thirteen on each of its long ones. Each column has a shaft that tapers at the top, and is characterized by twenty flutes and four drums, the lowest one of these set directly on the stylobate. Each column, including the capital, reaches a height of almost seven metres.

Unique among the temples of Agrigento, its entablature is intact, formed by a smooth architrave and a frieze that is clearly recognizable from the typical alternating metopes (sixty-eight in number) and triglyphs (seventy-two in number), an element typical of the Doric order. Furthermore, note how the metopes and the triglyphs located at the farthest ends of the four friezes, are wider (1.67 metres) than the others: this is so as to solve the so-called "corner conflict" (a problem typical of Doric architecture related to the need to structurally and visually reinforce the points of contact between the different segments of the entablature). On the short sides, above the frieze, the horizontal cornice (called geison in Greek) projects outwards, together with the two oblique cornices framing the tympanum, thus constituting the pediment. The total absence of any trace of supports both inside the metopes of the frieze, and outside the two tympana on the pediments, has led to the hypothesis that they were all devoid of a sculptural decoration. Clearly visible is the fact that the columns are not perfectly vertical, but rather inclined a few millimetres inwards towards the monument; also visible at a third of the height of each shaft is a slight swelling (or entasis). Lastly, each intercolumniation (the space between the columns) gradually narrows from the centre to the corners of the peristasis, thereby creating a particular optical effect that makes up for the distorted vision of the temple when it is observed from a distance. After entering the temple and crossing the ambulatory, you reach the cella, which is set on a base with one step leading up to it. This is divided into a pronaos, a naos and an opisthodomos, the first and last distili in antis (that is, each with two columns situated between the antae). In the pronaos, to either side of the entrance to the naos, two pylons rise up inside which two flights of stairs were built, making it possible to climb up to the roof of the sacred building to carry out maintenance work. Nothing remains of the roof which was traditionally double-gabled, supported by wooden trusses, and covered with terracotta tiles. As for the naos and the opisthodomos, these two spaces, which in ancient times were never connected, were instead made into a single space to allow for entry from the west when Gregory, Bishop of Agrigento, transformed the temple into a church in the late 6th century. In addition to reorienting the entrance to the building, the intercolumniation of the outer colonnade was walled shut, while six round arches were made in the masonry of the long sides of the naos. Hence, the entire building now resembled a church, characterized by the division of the internal space into three naves. This new use was recorded until 1748, when the church was deconsecrated. Later, in 1788, thanks to the intervention of the Prince of Torremuzza authorized by the Bourbons, the space between the columns of the peristasis was freed, and the original appearance of the exterior of the building was restored, while inside the ancient naos the side arches were left intact. Still today, they constitute an evident trace of the transformation of the ancient temple into a church. To this regard, we should not overlook the fact that we owe this 5th-century-BC temple's exceptional state of conservation to its repurposing. That could explain why, in May 2005, the Catholic Church Congregation for Divine Worship proclaimed Saint Gregory II of Agrigento (Bishop Gregory rose to the honour of the altars in the 15th century) patron saint of conservators of archaeological and architectural heritage.

Here is an image of the inscription: 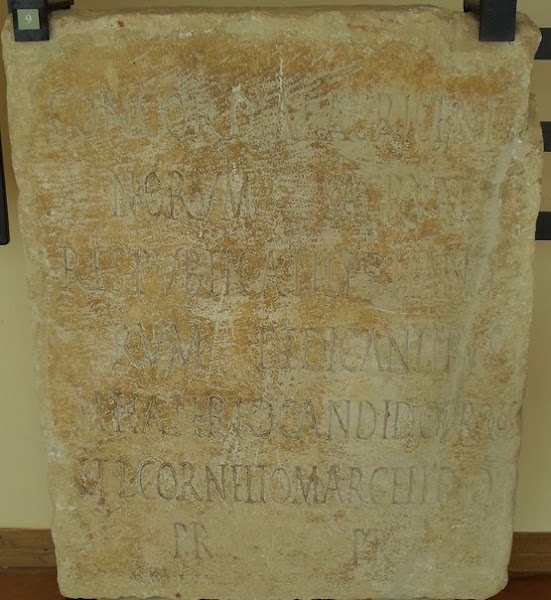