Get back! Clear
the way for the god!
For the god wants to pass through your midst
erect and swollen!

Get back! Make an open space for the god! For the god, erect, swollen, wants to pass through your midst!

There is a representation of such a procession on an Attic black-figured cup, ca. 550 B.C., in Florence, Museo Archeologico Etrusco, 3897: 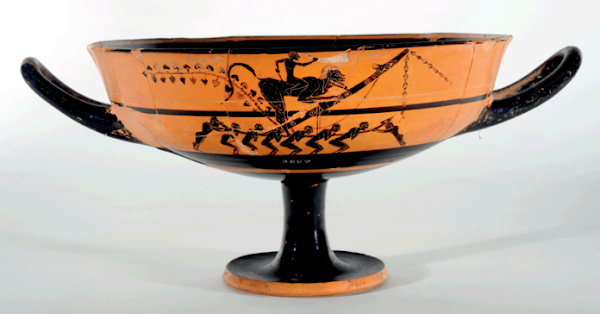 'The traditional festival of the Dionysia', writes Plutarch nostalgically, 'was conducted in a homely and cheerful way (δημοτικῶς καὶ ἱλαρῶς): an amphora of wine, a vine tendril, then someone dragging a goat, someone else following with a basket of figs, and presiding over it all [or 'finally'] the phallus (ἐπὶ πᾶσι δ᾽ ὁ φαλλός)'. The phallus is basic. What was carried was not in fact just a phallus but a phallus on a long wooden pole, which could be decorated to suggest the shaft of a very long, thin penis; the phallus itself, in this and other iconographic contexts, is normally given an eye, like an animate thing. What a typical phallic procession was like it may be idle to enquire, since sportive variation was probably the norm. That in Aristophanes is very simple (but there are good plot reasons for this), a single phallus to be 'held upright' by a single carrier. An extraordinary black figure vase of the mid-sixth century in Florence shows on its two sides something very different, six naked (and sometime ithyphallic) men straining under a giant phallus, on which is perched (or fastened) a huge demonic figure, who bears in turn, on one side of the vase, a diminutive rider. An extract from a Hellenistic antiquarian, Semos of Delos, describes the singular costumes and songs of two teams or troupes (ithyphalloi and phallophoroi) associated with phallic processions, but does not make plain where in the Greek world the rather precise performances that he evidently has in view took place. Similar teams or troupes (the word is appropriate in order to stress that more was required than just to carry the pole) surely performed in Attica too, or Aristotle could not have derived comedy from 'the leaders of phallic rites'. But what kind of Athenians assumed the ambiguous honour (if Athenians indeed they were) we do not know.

How was a festival affected by being conducted under the presidency of a phallus? Modern westerners might react to such a symbol with a blend of embarrassment and amusement; the breach of a central convention of modesty might seem to demand, or at least to license, uncontrolled behaviour of many kinds. Inhabitants of a city full of herms cannot have been so embarrassed by exposed genitalia, but comic phalli could still raise a laugh among children, and a phallic procession was surely not conducted in an atmosphere of grim solemnity. Pindar's Apollo laughs at the ithyphallic antics of the mules of the Hyperborean land. The phallus probably struck an informal, uninhibited note, therefore. But it was also, above all, a symbol and a celebration, or at least an acknowledgement, of male lust. The proof lies not so much in aitiological myths that explain the rite through incidents of frustrated lust, nor yet in the thoroughly lustful song with which Dikaiopolis in Aristophanes accompanies his phallic procession, as in the manifest continuity between the rituals and the perpetual aching desires of Dionysus' companions the satyrs, so comically depicted on such a huge number of vases. The satyrs are not merely negative examples of a lust that is undiscriminating and outrageously uncontrolled; they also express, in comically transferred form, a recognition and even a complaisant acceptance of the power of desire within those who are not satyrs but men. Such desire is stimulated by Dionysus in his capacity as god of wine, as the ancients often pointed out. But to be maddened by desire is also in itself a Dionysiac experience, in the sense of being a form of 'madness'. Aphrodite is patroness of love or desire when seen as a relation between two persons. Viewed merely in its effects on a desiring male subject, desire derives rather from Dionysus. No ancient source, when listing the domains of Dionysus' competence, mentions 'sexuality'. Yet it is hard to dispute that issues of sex or at least gender were close to the heart of his appeal.

On the meter of PMG 351a see Calvert Watkins, How to Kill a Dragon: Aspects of Indo-European Poetics (New York: Oxford University Press, 1995), pp. 159-160 (page images only here, because I can't figure out how to render the scansions in HTML): 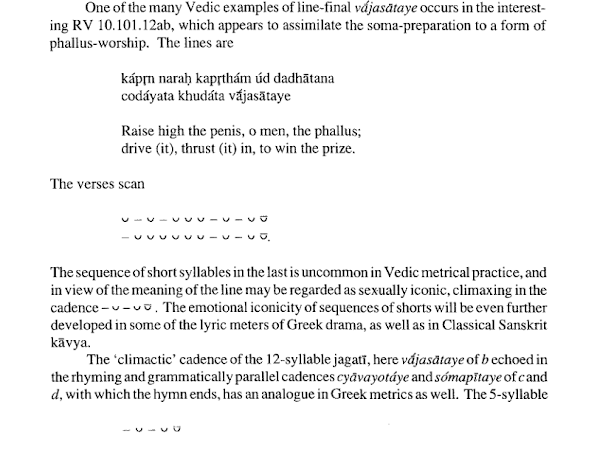 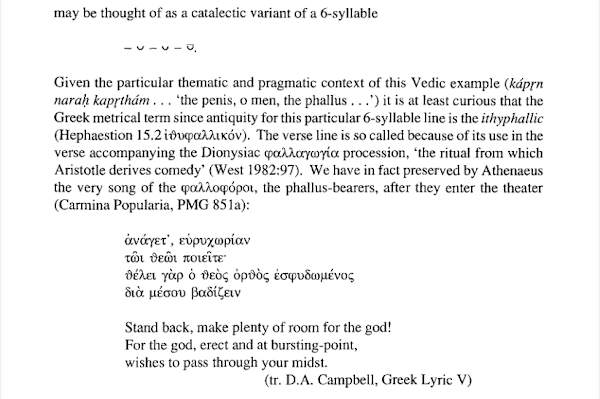 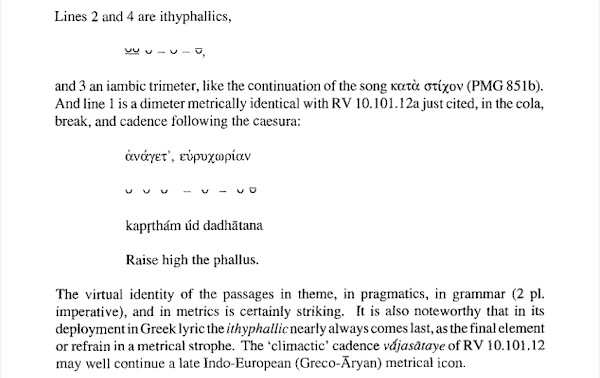 Here is the entry for ithyphallic in Carlo G. Carlucci, A Field Guide to Greek Metre ([Berkeley:] Atypical Press, 1978): 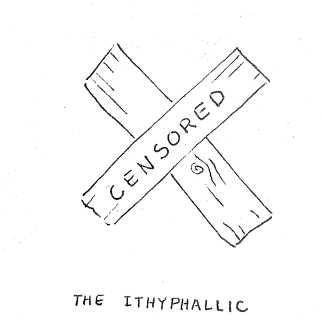 For more on the procession see Eric Csapo, The Dionysian Parade and the Poetics of Plenitude (University College London, Housman Lecture, 20 February 2013).