A Crux in Aeschylus' Agamemnon

and here she lies, his captive, and auguress, and concubine, his oracular faithful bedfellow, yet equally familiar with the seamen's benches.

The same passage (tr. Alan H. Sommerstein, with his note and Greek text and apparatus, from the new Loeb Classical Library edition of the Oresteia, pp. 174-176):

and with him this captive, this soothsayer, this chanter of oracles who shared his bed, this faithful consort, this cheap whore306 of the ship's benches.

306 lit. "mast-rubber", where ἱστός "mast" is metaphorical as in Strabo's tale (8.6.20) of the Corinthian hetaera who said, when taunted with the fact that she did no proper work, "I've lowered three ἱστοί before now in [snapping her fingers?] this length of time". On the obscenity, unparalleled in tragedy, see my discussion in A. Willi ed. The Language of Greek Comedy (Oxford, 2002) 155–6.

[Klytaimestra] denounces at great length the extramarital sexual activities of her husband, which in most male Greeks' view—with the sole exception of his insult to her in bringing Kassandra to her home—were none of her business. And in the course of doing so she uses two highly untragic vocabulary items. One is the notorious ἱστοτριβής (1443), referring to Kassandra. It will be necessary to take some time over this word, in view of some of the truly desperate attempts that have been made to keep Aeschylus at this point within the commonly assumed canons of tragic diction. M.L. West (1990a: ad loc.), with a reference to Iliad 1.31, notes coniugis nauticae nocturno muneri diurnum additur: but for one thing one could not do loom-weaving on board an ancient ship, for another, of the two words which on this view would refer to Kassandra's sexual duties, κοινόλεκτρος (1441) and ξύνευνος (1442), neither has anything in its own immediate context to suggest that she is being portrayed as a nautical consort, and for a third, and most importantly, it is absurd to make Klytaimestra climax this passage, which is dripping throughout with her jealousy of the women who replaced her abroad and the one who nearly supplanted her at home, by referring to the ordinary work of a maidservant which, far from being any threat to the mistress of the house, actually emphasizes her superiority inasmuch as she does not have to do it herself! Lloyd-Jones (1978: 58–9), building on a suggestion by Latte, sees an allusion to the practice in at least one Greek state (we do not know which) of punishing women for some offence (probably, but not certainly, unchastity) by making them sit on top of a ἱστός (more likely a loom, as Lloyd-Jones thinks, than a pole, as suggested by O'Daly 1985: 13: the object, according to Hesychius α 2576 [sic, read 2578], was to humiliate, not to torment). This neatly enables us to have our cake and eat it, by allowing ἱστοτριβής to mean 'whore' or the like while keeping Aeschylus free from 'an obscenity … unparalleled in tragic diction' (O'Daly 1985: 13); but it depends on our accepting that a word referring to a very specific punishment, and not one used at Athens, would be instantly intelligible to Aeschylus' Athenian audience. [....] Are we really meant to suppose that he accidentally made Klytaimestra refer to Kassandra, in a sexually charged context, by a word which could so easily be taken to mean πόρνην ἥτις τὸ πέος τρίψοι (Ar. Vesp. 739; cf. also Ar. Ach. 1149, Vesp. 1344)—and that neither he nor anyone else noticed it in rehearsal and changed the word? Unless we emend, we have no alternative but to accept the obscenity. It may be alien to tragedy, but it is far from alien to this particular tragic character. The whole point about Klytaimestra, especially in this scene, is that she breaks all the rules; and this word, prominently placed at the beginning of a line before a pause, is the culmination of her rule-breaking. What is more, by using it she contrives to perpetrate a maximal insult to Kassandra and Agamemnon at once. If, as the comic parallels suggest, ἱστοτριβής would be taken as meaning approximately 'one who gives hand jobs', then on the one hand the princess and prophetess Kassandra (to whom Klytaimestra was so elaborately sympathetic in 1035-46) is being downgraded to the level of the meanest slave in a Peiraeus brothel, and on the other hand it is being insinuated that Agamemnon had been suffering from erectile dysfunction and had needed manual assistance to overcome it.

Klytaimestra is saying: 'I have no leisure to rub (wear away) this doorway', i.e. 'I can't wait hanging around the door here'. It is a vulgar expression, and she uses an even more vulgar expression involving the root τριβ- at 1443, where she refers to the corpse of Kassandra as ναυτίλων δὲ σελμάτων ἱστοτρίβης. Casaubon kept the word, translating it 'publicum navis prostibulum'. A ἱστός is anything set upright, an erection. Cf. the slang use of English 'beam', Latin trabs. Strabo, 8.378 [i.e. 8.6.20], has an anecdote about a ἑταίρα who, πρὸς τὴν ὀνειδίζουσαν, ὅτι οὐ φιλεργὸς εἴη οὐδ' ἐρίων ἅπτοιτο, retorted 'ἐγὼ μέντοι ἡ τοιαύτη τρεῖς ἤδη καθεῖλον ἱστοὺς ἐν βραχεῖ χρόνῳ τούτῳ.' ('I took down three beams in three shakes of a cow's tail'). Cf. also παιδοτριβέω sensu obscaeno = παιδεραστέω, Anth. Pal. 12.34.6; 222.2. 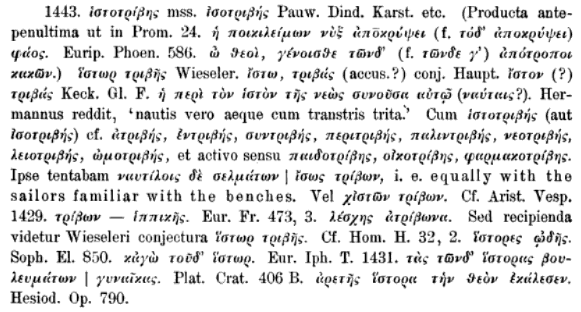 Here is a list of some more recent conjectures.