I received two informative emails in response to my post on balanoculture and balanophagy.

In your Laudator Temporis Acti blog last Tuesday, you mentioned an _Ambio_ article by Bainbridge that you do not have access to. I do. The word _balanoculture_ occurs in three of the article abstract's four sentences:

"The oak tree, today revered primarily for its beauty, may once have been the central food bearer around which entire societies (balanocultures) built their diet and lifestyle. Recent evidence shows that tools used for grinding and pounding food existed long before corn became popular and may have been used to process acorns into meal. Factors such as the domestication of goats and the burning of oaks for fuel may have contributed to the movement away from balanoculture. By the end of this century severe crises in agriculture world-wide may make a return to some modified form of balanoculture a viable alternative."

Bainbridge doesn't explicitly claim the credit or blame for this word, but he goes to the trouble of writing this (last sentence of the first paragraph): "I propose that the acorn resource and the balanoculture (from the Greek _balanos_--acorn) it supported were essential for the evolution of agriculture as we know it today."

Although you indicate that _balanoculture_ is a barbarism, you neglect to note the oddity of using a word of the form <foo>culture to designate a society that cultivates <foo>. Although he twice defines _balanoculture_ in this way, Bainbridge uses the word both as he defines it and to designate the act or technique of cultivating acorns.

The journal News from Native California published an issue a few years ago (c. 2003–2005) with a number of articles related to acorn eating, or so I recall. I no longer have direct access to back issues, but in trying to track down a reference to this issue I found a citation for a title that uses the word "balanophagy" in a document titled "Past and Present Acorn Use in Native California"
(http://www.csus.edu/ANTH/museum/eguides/acorn/contents/Past%20and%20Present%20Acorn%20Use%20in%20Native%20California.pdf)

Maybe the issue I'm remembering is the one described here (Fall 2005):
http://www.heydaybooks.com/news/issues/v19n1toc.html, with "Beautiful Tree: California Indians and Oaks." The "number of articles" I recall may have been this one article with multiple sidebars.

Thoreau's journals, as you know, are full of oaky commentary and description ("I should not be ashamed to have a shrub oak for my coat-of-arms"--Feb. 8, 1856). I see you've previously written about acorn eating and quoted from Thoreau's October 8, 1851, journal entry here: http://laudatortemporisacti.blogspot.com/2007_02_01_archive.html.
On October 17, 1857 he wrote, "Glossy-brown white oak acorns strew the ground thickly, many of them sprouted. . . . I find some quite edible, but they too, like wild apples, require an outdoor appetite. I do not admit their palatableness when I try them in the house."

_Walden_ might have been titled _Two Years and Two Months before the Mast_.

And what did mastodons eat, anyway?

Chris attached to his email the following photograph: 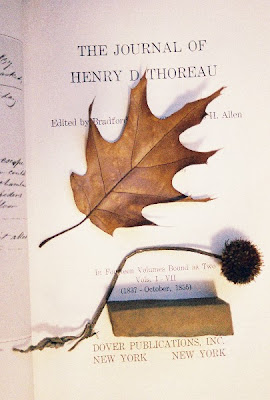