[4] Even literary pursuits, the most becoming thing for a gentleman to spend money upon, are only justifiable as long as they are kept within bounds. What is the use of possessing numberless books and libraries, whose titles their owner can hardly read through in a lifetime? A student is overwhelmed by such a mass, not instructed, and it is much better to devote yourself to a few writers than to skim through many.

[5] Forty thousand books were burned at Alexandria: some would have praised this library as a most noble memorial of royal wealth, like Titus Livius, who says that it was "a splendid result of the taste and attentive care of the kings." It had nothing to do with taste or care, but was a piece of learned luxury, nay, not even learned, since they amassed it, not for the sake of learning, but to make a show, like many men who know less about letters than a slave is expected to know, and who uses his books not to help him in his studies but to ornament his dining-room. Let a man, then, obtain as many books as he wants, but none for show.

[6] "It is more respectable," say you, "to spend one's money on such books than on vases of Corinthian brass and paintings." Not so: everything that is carried to excess is wrong. What excuses can you find for a man who is eager to buy bookcases of ivory and citrus wood, to collect the works of unknown or discredited authors, and who sits yawning amid so many thousands of books, whose backs and titles please him more than any other part of them?

[7] Thus in the houses of the laziest of men you will see the works of all the orators and historians stacked upon bookshelves reaching right up to the ceiling. At the present day a library has become as necessary an appendage to a house as a hot and cold bath. I would excuse them straightway if they really were carried away by an excessive zeal for literature; but as it is, these costly works of sacred genius, with all the illustrations that adorn them, are merely bought for display and to serve as wall-furniture. 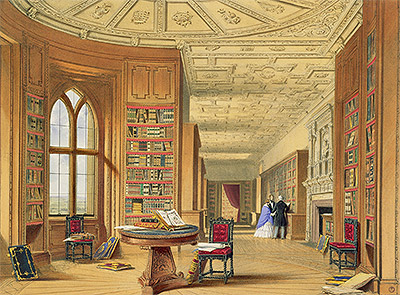