I have not read Greer Ramsey, "A breath of fresh air: rectal music in Gaelic Ireland," Archaeology Ireland 16.1 (Spring 2002) 22-23, but apparently the article discusses the braigeteóir, or professional farter. The title is intriguing and reminded me of the following passages which mention rectal music.


A fart which cannot find an outlet kills many a man; a fart also saves, sending forth its lisping music. Therefore if a fart saves, and on the other hand kills, a fart has the same power as kings.


Some have such command of their bowels, that they can break wind continuously at pleasure, so as to produce the effect of singing.


They wheeled round by the dike on the left; but first each pressed his tongue between his teeth at their leader for a signal and he made a trumpet of his rear.


His guts began to grumble like greedy porkers.
He had pissed a pot in a pater noster minute,
He blew the bugle at his ridge bone's bottom,
So that all who heard that horn held their nose after,
And wished it had been wiped with a wisp of rushes.

I have not seen the anonymous pamphlet Arse Musica; or, The Lady's Back Report to Don Fart-in-hand-o Puff-in dorst (1722), which is apparently a reply to The benefit of farting explain'd: or, the fundament-all cause of the distempers incident to the fair-sex, enquired into. Proving à posteriori most of the dis-ordures in-tail'd upon them, are owning to flatulencies not seasonably vented. Written in Spanish by Don Fartinando Puff-indorst, professor of bombast in the University of Crackow. And translated into English at the request, and for the use, of the Lady Damp-fart of Her-fart-shire. By Obadiah Fizzle, Groom of the Stool to the Princess of Arsimini in Sardinia. Long-Fart: (Longford in Ireland), printed by Simon Bumbubbard, at the sign of the Wind-Mill opposite Twattling-Street, 1722.

In modern times, Joseph Pujol (whose stage name was Le Pétomane) could generate rectal music at will. 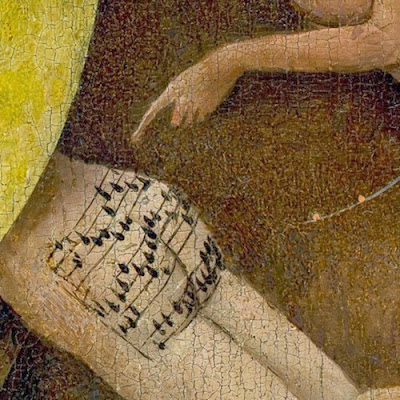