I have a few minor quibbles about the translation of Aristophanes' Acharnians by Jeffery Henderson in the Loeb Classical Library series (Cambridge: Harvard University Press, 1998).

Henderson didn't translate ὁ βασιλέως Ὀφθαλμός at the beginning of line 94 (spoken by the herald announcing Pseudo-Artabas), so on p. 69 add:

Add another oink, to match the number of Greek pig sounds in the line (κοῒ κοῒ κοΐ).

the composer of bad songs

Antimachus' songs may well have been bad, but the Greek as printed (τὸν μελέων ποιητήν) means simply "the composer of songs," so remove "bad."

Henderson punctuates correctly a few lines down, where the phrase is repeated.

There is also a misprint in the discussion of this play by Douglas M. MacDowell, Aristophanes and Athens (Oxford: Oxford University Press, 1995), p. 57:

Therefore dressing in rags makes Dikaiopolis look like a Euripidean hero, and a Mysian cup and other accessories make him look like Telephos specifically.

Examples of nominative participle with verb of perception in Acharnians (all with imperative ἴσθι, tr. Henderson):

Count on being an instant goner.

Know that you are irksome.

You must realize
that you are a shameless and steely man.

Now take hold of my head, so I can puke. 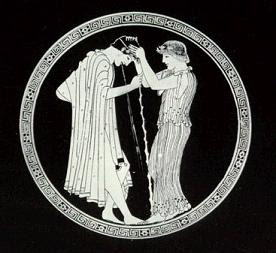 See further:Line 1199 is an appreciative exclamation in praise of a feature of the female anatomy. If you memorize the Greek, perhaps you will find a suitable occasion on which to quote it:

What bubbies, how firm and quince-like!