Blood for the Ghosts


Whoever may complain of the difficulties which beset the pursuit of classical scholarship, assuredly it will not be the scholar himself. He knows it is precisely by means of these difficulties that he is made perfect in his work. If he is led to repine at times that knowledge should be hidden, it is not as wishing to evade the pains of searching, but because he is already longing to bestow his labour on some other part of the field. It is nothing to him that his time has often to be spent on minute and seemingly trivial points, for he feels that the smaller is to be estimated by the standard of the greater, and that in accepting his calling he has accepted a duty, more or less defined, to everything that appertains to it. The task of recovering a lost word or allusion is not resented as a gratuitous hardship, but embraced as a welcome boon, which compels the student, as it were, to enter the author's laboratory, not as a spectator, but as a fellow-worker, and rewards the restoration with something of the same delight which must have attended the original invention. It is his labour that he has to go down among those who have long been dead; but there is conscious pleasure in every step of the way, and it is his glory that he can break their sleep and revive them, that he can make them drink the blood of life and speak living words, that he can endow them, if not with the gift of prophecy, at least with the human power of memory.


Yet let us be honest. We ourselves, when once Dryasdust has done his work within us, and we advance to the shaping of our scientific results—from that time forth we do just the same, we use our free formative imagination. The tradition yields us only ruins. The more closely we test and examine them, the more clearly we see how ruinous they are; and out of ruins no whole can be built. The tradition is dead: our task is to revivify life that has passed away. We know that ghosts cannot speak until they have drunk blood; and the spirits which we evoke demand the blood of our hearts.

Both Conington and Wilamowitz are alluding to Homer, Odyssey 11.34-50, here in Richmond Lattimore's translation:


Now when, with sacrifices and prayers, I had so entreated
the hordes of the dead, I took the sheep and cut their throats        35
over the pit, and the dark-clouding blood ran in, and the souls
of the perished dead gathered to the place, up out of Erebos,
brides, and young unmarried men, and long-suffering elders,
virgins, tender and with the sorrows of young hearts upon them,
and many fighting men killed in battle, stabbed with brazen        40
spears, still carrying their bloody armor upon them.
These came swarming around my pit from every direction
with inhuman clamor, and green fear took hold of me.
Then I encouraged my companions and told them, taking
the sheep that were lying by, slaughtered with the pitiless        45
bronze, to skin these, and burn them, and pray to the divinities,
to Hades the powerful, and to revered Persephone,
while I myself, drawing from beside my thigh my sharp sword,
crouched there, and would not let the strengthless heads of the perished
dead draw nearer to the blood, until I had questioned Teiresias.        50 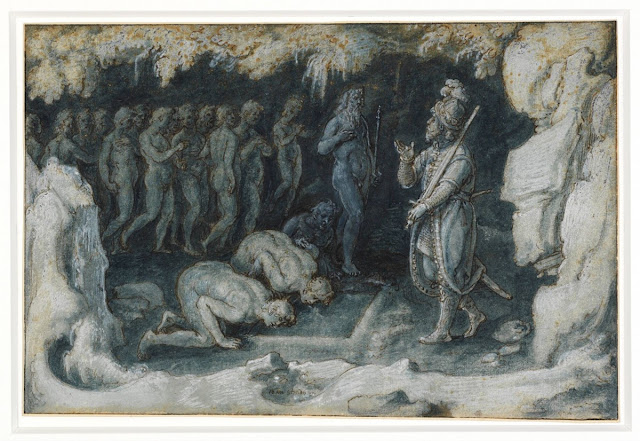