Talking Rashly and Without Foresight


72 Quicquid in buccam venerit
Whatever came into his mouth

Whatever came into his mouth. Used whenever we speak of people talking freely and in security, without premeditation, saying whatever comes into their heads. This is what we do in the company of our loyal friends, with whom we can joke and that with confidence. Cicero to Atticus, book 14: 'If there is nothing special, write to me whatever comes into your mouth.' Again in book 12, 'When we are together, and chatter away with whatever comes into our mouths.' This is applicable to those who talk rashly and without forethought, just as if their words were born not in their hearts but in their throats. 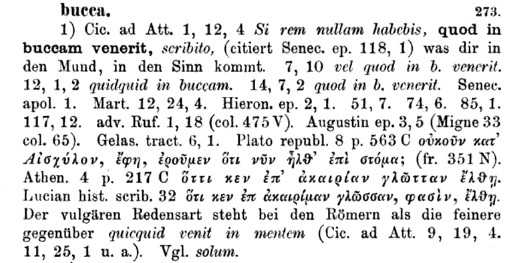 I'm reminded of a schoolyard taunt from my childhood: "You have diarrhea of the mouth and constipation of the brain."