Conditions of a Private Library


In distinction noe lesse from those of the more Extensive, Pompous, and Stationary Libraries, of PRINCES, UNIVERSITIES, COLLEGES, and other PUBLICK-SOCIETIES, than of the more Restrained though otherwise Voluminous COLLECTIONS incident to those of the PROFESSORS of PARTICULAR FACULTIES: as being calculated for the SELF-ENTERTAINMENT onely of a solitary, unconfined ENQUIRER into BOOKS, and VOTARY of CICERO'S OTIUM LITERATUM: Iis (dico) Literis quibus Infinitatem Rerum atque Naturae, et in hoc ipso Mundo Coelum, Terras, Maria, cognoscimus. Tusc. Disp. Lib. Wherein what I propose as principally to be attended to is,
1. As to the Generall Scope and Purpose of it:
The comprehending in fewest Books and least Room the greatest diversity of SUBJECTS, STYLES, and LANGUAGES its Owner's Reading will bear; with Reguard had to theyr AUTHORS, EDITIONS, and PROPORTIONS on each Subject, answerable to theyr Weight, and the Particular Genius of their said Owner.
2. In the Book-binders Works,
Decency and Uniformity; with some Marks of theyr Propriety.
3. In theyr Registry.
Clearness, Comprehensiveness, and Order, and that
Numericall
Three-fold, viz.  Alphabeticall
Classicall

Hat tip: Eric Thomson, who a few years ago sent me this photograph of part of his private library: 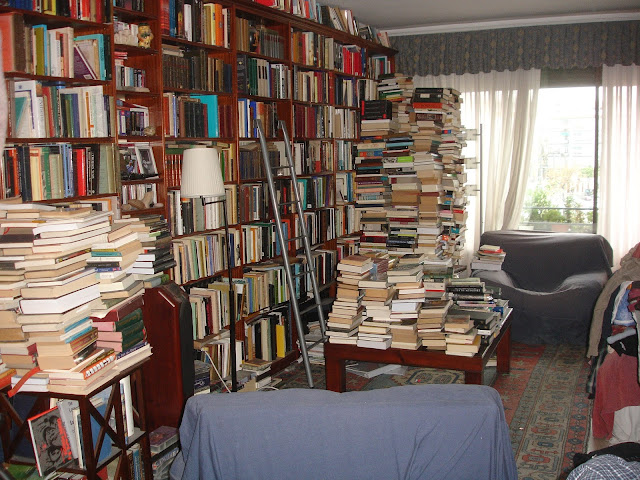