I grew up across the river from Bangor, Maine, and spent much of my time in that city, which was within easy walking distance from my parents' house. When I was kicked out of high school in my senior year, I spent the two weeks of my suspension reading books in the Bangor Public Library (by choice, not compulsion).

I was recently surprised to learn that classical scholar Benjamin Oliver Foster (1872-1938) was born in Bangor. The city should have a statue erected in his honor, or a street named after him. Here is the article on Foster (by Mortimer Chambers) in Biographical Dictionary of North American Classicists, ed. Ward W. Briggs, Jr. (Westport: Greenwood Press, 1994), p. 192:

Foster was one of the early Stanford alumni who returned to that university for their teaching careers after brief service elsewhere. His chief scholarly contribution was his translation of the first five volumes of Livy, through book 22, for the 14-volume Loeb edition. He based his text on Weissenborn-Müller but took account of the successive volumes of the Oxford text of Conway-Walters. His translation was found accurate and elegant, though W.H. Semple, in CR 43 (1929) 90, invited him to strive for more Livian rhetoric here and there. The fifth volume in particular goes beyond the usual Loeb format of the period by including both a long bibliography, with summaries of many of the papers cited, and useful maps taken from Kromayer's Schlachtenatlas. This latter feature was praised by the leading German scholar of Livy, Alfred Klotz, who declared that no other edition was so well equipped in this respect: PhW 50 (1930) 803.

Foster was known to Stanford undergraduates as an enormously popular teacher of courses in Roman literature of both Republic and Empire. He was an avid swimmer and tennis player and a gourmet cook who enjoyed preparing elaborate meals for colleagues.

Some more publications by Foster (not including book reviews):
There is a very amusing error on the Find a Grave web site concerning Foster:


The title of his PhD dissertation was "De quartae declinationis apud priscos latinos usu" which translates to "About a quarter of the decline in the use of the old Latin." 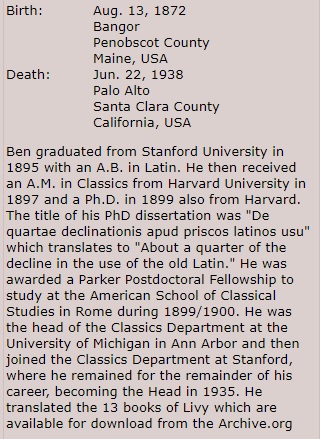 The correct translation is of course "On the use of the fourth declension in early Latin [writers]." 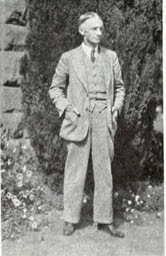