The Shadow of an Inkpot


The most famous and strangest of the preliminary pages is the so-called Ezra portrait, already mentioned, now placed as a frontispiece. It shows a haloed man in Jewish priestly garments sitting hunched up on a stool almost in profile, writing in a book half open on his lap. He has his feet on a low pedestal. Scattered around him are the various instruments of a scribe's occupation — stylus, dividers, pen, ink pot and what is probably a dish of pigment on a separate table. Behind him is an open cupboard, with panelled doors hinged back to reveal five sloping shelves on which are arranged nine books bound in decorated dark red covers. A very similar bookcase enclosing the four Gospels on shelves is depicted in a mosaic of Saint Laurence in the Mausoleum of Galla Placidia in Ravenna, datable to the second half of the fifth century, almost within Cassiodorus's lifetime. The carpentry of the furniture and the ornament carved around the cupboard shown in the Codex Amiatinus are extraordinarily delicate and sophisticated. There is an enlightened attempt at perspective. The ink pot throws a shadow on the ground, worth noting if only because it is usually said that shadows do not appear in European art until the fifteenth century. Simply as an illustration of a scribe drawn in England in the late seventh century, the picture is full of interest, not least in that he has no writing desk and he is working directly into a book on his lap, as scribes still do in Ethiopia today. As I was jotting this down and thinking how different it is from most images of a medieval scriptorium, I realized that I was at that moment taking my notes into a hard-bound exercise book on my own lap, because the Codex Amiatinus filled the entire table before me, leaving no room for anything else. For a moment, the scribe seated writing in front of a book cupboard might have been me beside the microfilm cabinets and reprographic equipment of the Laurenziana.

The Ezra portrait from the Codex Amiatinus (click once or twice to enlarge; the inkpot is at the lower right, with a rust-colored shadow cast on the floor to the right): 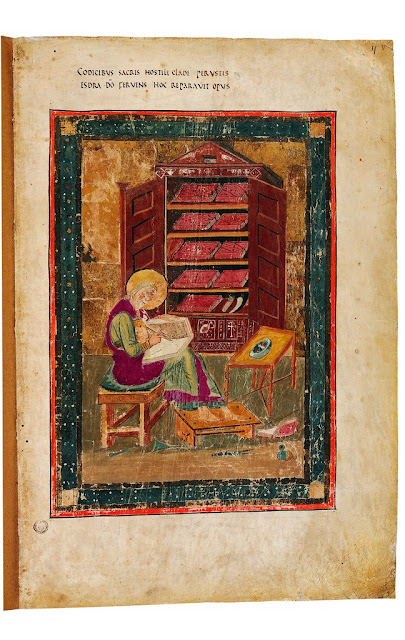