An Intellectual Addresses the Dolts


I like it! [To audience] But why are you wretches sitting like dummies,
Dupes of us clever people, as dumb as stones,
Mere masses, moronic sheep, a pile of old jars? 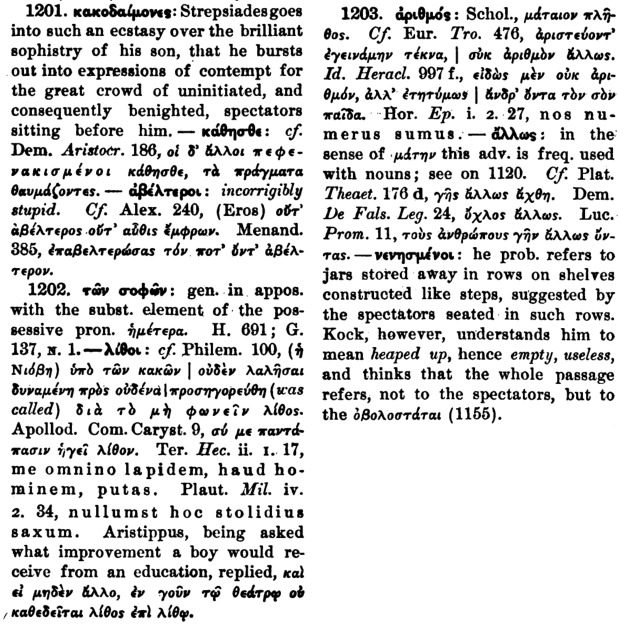 Am I permitted to mention Milton W. Humphreys? He fought in the Civil War on the Confederate side, and therefore is probably anathema to today's bien-pensants. His autobiography is preserved at my alma mater, the University of Virginia. I wish it were published, but I doubt it ever will be.


Milton W. Humphreys was a distinguished professor of Greek at the University of Virginia for 25 years. Born in what is today West Virginia to a devout Presbyterian family, he was the seventh of twelve children in this Scotch-Irish brood. He might never have emerged from his native Greenbrier County if it had not been for the interest of a visiting Presbyterian minister, who saw in young Humphreys the stuff of which clergymen are made. So he was sent to Charleston (VA) for the beginnings of his education, at the hands of another Presbyterian minister. Humphreys always remained a Presbyterian but he never became a minister. His academic career at Washington College was interrupted by the Civil War, in which he served from 1862 until the end as an artilleryman in the Army of Northern Virginia. Following Gen. Robert E. Lee in peace as in war, Humphreys returned to Washington College, graduated first in his class, and stayed on to teach.

His subsequent career involved appointments at major new universities, Vanderbilt and the University of Texas. If in these twelve years Washington and Lee had offered him a position in Greek, he would gladly have accepted it: he had become a classicist because that is where he sensed his alma mater needed him. Lexington's loss was Charlottesville's gain. Throughout his life he maintained an interest in mathematics, astronomy, ballistics, and botany, along with a preternatural interest in gunnery that led him to contribute frequently to The United States Journal of Artillery. His classical scholarship covered a broad range of interests, but he is best remembered for his metrical work, begun with his dissertation and for his texts and commentaries.

Jon D. Mikalson, An Informal, Slightly Hagiographic History of Classics At the University of Virginia (2015), pp. 30-31:


Milton Humphreys must have been the first Classics faculty member actively recruited, in the modern sense, at the University and was recommended for appointment by Gildersleeve and Peters (and twenty-one others) in 1882 and finally accepted an appointment in 1887. From West Virginia, educated at Mercer Academy in Charleston, W. Va., he did his undergraduate work at Washington (now Washington and Lee) College. His study there was interrupted by service in the Confederate Army as Sergeant in the Thirteenth Virginia Light Artillery. Years later Humphreys complained to Robert E. Lee, then President of Washington and Lee, of the time he had lost to study during the War. President Lee responded, "Mr. Humphreys! However long you live and whatever you accomplish, you will find the time you spent in the Confederate army was the most profitably spent portion of your life. Never again speak of having lost time in the army." Nor did he. After the War Humphreys taught at Washington and Lee College for eight years, receiving his M.A. there in 1869, and, in 1874, his Ph.D. from the University of Leipzig. In 1875 he became the first Professor of Greek at the newly established Vanderbilt University and in 1883 the first Professor of Greek and Latin at the new University of Texas in Austin. It was at Washington and Lee College that Humphreys introduced the "Roman" pronunciation of Latin to this country. He wrote of this: "I have had some fights in my life of which I am wont to boast, as when, from sunset till dark, with one three-inch rifle I fought at 400-500 yards range nine pieces of artillery under Colonel DuPont; but the fight of my life that required the most moral courage was c = k, j = y, v = w in Latin, with the influence of my full professor against me."

Humpreys had a productive scholarly career, writing books, articles, and translations on Aristophanes, Sophocles, Demosthenes, and Hephaistion and on Greek and Latin metrics. Of these writings Fraser later wrote, "no greater meed of praise may be heaped than by merely citing the fact that his numerous writings were highly commended by his predecessor at the University, the great Basil L. Gildersleeve, who was prone to ridicule, good-naturedly and otherwise, nine-tenths of his Greek colleagues." Humphreys was elected President of the American Philological Association in 1882. He also published regularly in The American Journal of Artillery and was considered a national expert on the subject. In his retirement he published various accounts of Civil War campaigns in which he had participated. He resided throughout his career with his wife and four daughters in "Wertland House," 1301 Wertland Street, built in 1830, once elegant but now housing University students on the first two floors and a hair salon in its basement.

Milton Humphreys retired in September, 1915, at age seventy-one, and died on November 20, 1928 and was buried in the University Cemetery. On his retirement 155 former students contributed to present him with complete sets of Jahresberichte über die Fortschritte der Altertumswissenschaft, Revue de Philologie, Revue des Revues (for which he had contributed American and Canadian entries), and The American Journal of Archaeology. Humphreys gave these to the Library and also his own sets complete to 1906 of Classical Review, Classical Quarterly, Classical Philology, Classical Journal, Philologische Wochenschrift, and nineteen volumes of Muller's Handbuch der Klassischen Altertumwissenschaft, all available for our use still today. 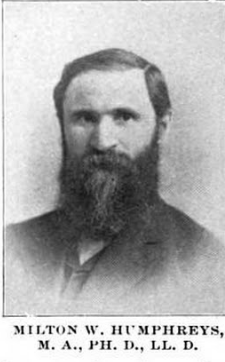