I’ve never wept over the death of a loved one; those ties, says my wife, are in my case too deep for tears. Nor do I weep in response to literature that moves me profoundly.

Yet I cry unexpectedly and involuntarily on seeing (on DVD) or hearing certain passages of classical music. And twice, curiously enough, I’ve wept piteously over the circumstances surrounding great verse.

Let me deal straightaway with the second instance, which occurred several years ago when an American friend from Oxford days, Charles Calhoun, urged me to go on Youtube and type in “George Steiner: ‘I summon up remembrance of things past.’” I urge the reader to do the same.

It takes a bit longer to describe the first occasion. I should begin by confessing that as one of nature’s chicken-hearted souls I shrink from facing new circumstances. So when my wife Jean, a baby daughter, and I arrived in Oxford in October of 1971, I found plenty to complain about, moaning repeatedly to my wife that we should have chosen Harvard for graduate work in ancient Greek history instead of Oxford.

We had come from Charlottesville, Virginia, where a spring bout with thyroid cancer forced me to postpone finishing several UVa assignments until our arrival in Oxford. One of them was to trace the evolution of a single choral passage in a Sophoclean play from its Renaissance form to the present. I chose a passage from my favorite, Oedipus at Colonus.

A glance at the 1502 Florentine edition of Sophocles by Aldus Manutius reveals that the choral passages suffered far more than did the remainder of the text in the long transmission from their ancient form to the present. Choruses in the 1502 Aldine text are often an incoherent mess, worlds removed from the polished eloquence of the Sophoclean choruses one reads today. Has any scholarly achievement of the past half-millennium been more neglected than the labors of those who devoted their lives to editing and thus improving these texts? Who outside the circle of classical scholars recognizes names such as Scaliger, Causabon, Bentley, Hermann, Elmsley, or Jebb? Consider the formidable array of tools required for the task — an intimacy with the ancient author’s entire corpus and its manuscript history, an exquisite knowledge of tragic meter, and a first-rate poetic imagination.

Fortunately most of the important printed editions of Oedipus at Colonus since the Renaissance were readily available on the open shelves of Oxford’s Bodleian Library. But a crucial one was missing — a late 18th century edition by a German scholar, R.F.P. Brunck. This, I discovered, was among the Bodleian’s rare book holdings in the surpassingly beautiful reading room known as Duke Humfrey’s Library.

So I filled out a request to have the book fetched and handed it to a librarian, the first in a series of a distinct breed of Oxford lady librarians I encountered over the next six years — middle-aged, tall, pert, razor-thin, with a cultivated accent spoken rapidly in a high pitch that warbled tunefully in its uppermost register.

A week passed. No Brunck. How differently things would have been managed at Harvard, I mused to myself. Up I went to complain to that same librarian, whose tart response made one thing clear: My efforts to come across as a well-mannered southern gentleman had failed; she now viewed me as simply another querulous American.

Several days into the second week the same librarian appeared at my chair in the reading room, silently plopping down a small volume in wretched condition. It looked as if someone, reading in the bath, had let it drop into the water. My first thought was characteristically invidious: “I’ll wager that the Widener Library’s copy at Harvard wouldn’t be in such sad shape.”

Then I opened to the frontispiece and read, “This book was found on the body of Percy Bysshe Shelly (1792-1822) when it floated ashore on the coast of Italy.”

I began weeping. I couldn’t stop! After a few minutes I rose and made my way to the men’s room to wash away the tears. Upon returning, I hurriedly copied out the relevant choral passage and, gingerly picking it up, carried the book back to the librarian at her desk. “Ah, finished so quickly, are we?” she said archly as she took it from my hand. Then she looked up, saw my reddened eyes, and asked, ever so gently and softly, “Would you like me to hold it for you till later?” 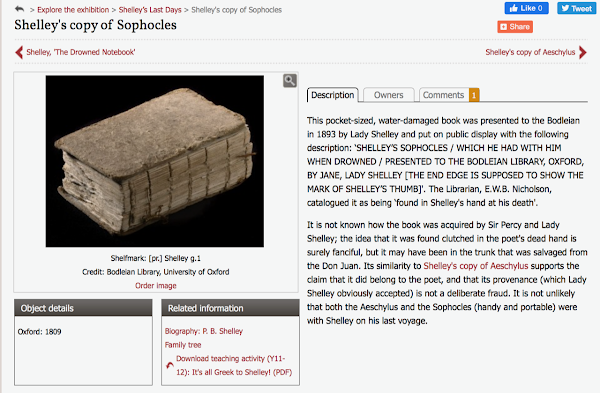