They plunder, they butcher, they ravish, and call it by the lying name of "empire". They make a desert and call it "peace".

Order No. 11 was the most drastic and repressive military measure directed against civilians by the Union Army during the Civil War. In fact, with the exception of the hysteria-motivated herding of Japanese-Americans into concentration camps during World War II, it stands as the harshest treatment ever imposed on United States citizens under the plea of military necessity in our nation's history.

Issued August 25, 1863, by Brigadier General Thomas Ewing, Jr., commander of the District of the Border, with headquarters at Kansas City, Order No. 11 required all the inhabitants of the Western Missouri counties of Jackson, Cass, and Bates not living within one mile of specified military posts to vacate their homes by September 9. Those who by that date established their loyalty to the United States government with the commanding officer of the military station nearest their place of residence would be permitted to remove to any military station in the District of the Border or to any part of Kansas except the counties on the eastern border of that state. Persons failing to establish their loyalty were to move out of the district completely or be subject to military punishment.

H.B. Bouton, a Unionist living near Kansas City, told of seeing large numbers of "poor people, widows and children, who, with little bundles of clothing, are crossing the river to be subsisted by the charities of the people amongst whom they might find shelter." Colonel Bazel Lazear, Federal commander at Lexington, Missouri, wrote his wife: "It is heartsickening to see what I have seen. . . . A desolated country and men & women and children, some of them all most [sic] naked. Some on foot and some in old wagons. Oh God."

Marauding by Union troops increased the misery of the refugees. Most of the soldiers enforcing the order were vengeance-minded Kansans who welcomed such a splendid opportunity to punish the Missourians. Ewing, to be sure, repeatedly ordered his men not to engage in wanton pillaging, but his efforts were largely in vain. By the end of September the depopulated district was a silent, forlorn land of stark chimney[s] standing over charred ruins.

Cass County, Missouri, in the middle of the Burnt District, was the home of my father's ancestors (Dahmanns, DuValls, Gillelands, and Wagners), some of whom were driven from their homes by this order. On a wall in my study hangs a reproduction of George Caleb Bingham, Order No. 11: 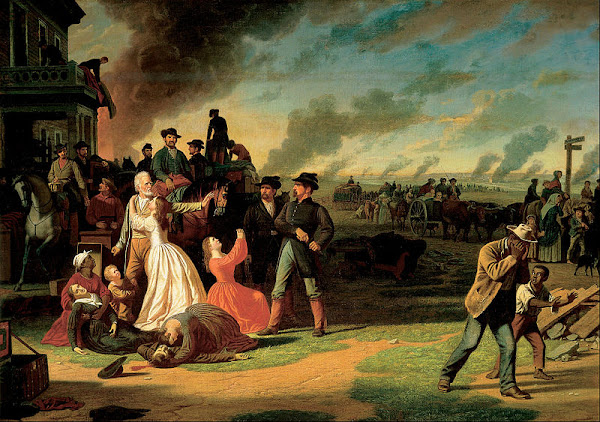